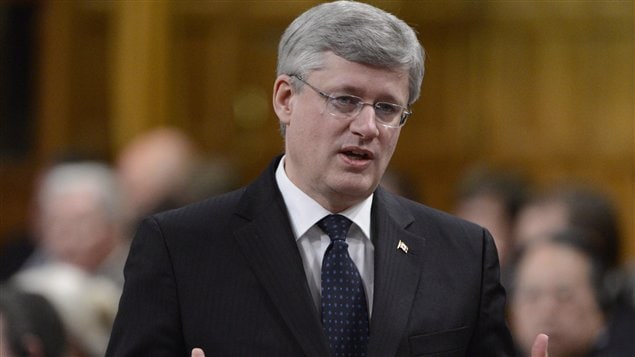 A new public opinion poll suggests that Stephen Harper’s Conservative Party government is taking a pounding on the issues of secrecy and ethics.

Two-thirds of those polled by Ipsos Reid said Mr. Harper’s government is too secretive and has failed to govern with high ethical standards. And, the poll suggests, that half the country believes Mr. Harper has a “hidden agenda.”

The Ipsos Reid survey was conducted for Postmedia News and Global Television.

It found that 54 per cent of Canadians believe the country is on the “wrong track.” That compares with 46 per cent who believe Canada is heading in the “right direction.”

The poll showed that 58 per cent disapprove of the Conservative government. Forty-two per cent approve.

The poll found that 63 per cent disagreed with the statement that “Harper Conservatives are living up to the promise they made when first elected in 2006 to provide an ethical, open and transparent government.” Thirty-seven per cent said they believed the Tories had met their commitment.

After seven years in power and holding a majority since 2011, Mr. Harper’s popularity has been sliding this year. The further bad news for the Tories is that polls show Justin Trudeau is more popular than Mr. Harper. Mr. Trudeau is due to be elected the leader of the Liberal Party this weekend.

Mr. Harper is also facing a backlash by Tory backbenchers who say the party leadership is over-controlling. The Conservatives also face questions about some election practices, such as so-called robo calls directing voters to wrong polling stations in the 2011 federal election in Guelph, Ontario. In addition, two cabinet ministers have been forced to resign under fire this year.

In the coming months, Mr. Harper is expected to begin an effort to refurbish the party and its image. An expected cabinet shuffle is expected this summer.

An expected Throne Speech this fall will emphasize tax cuts, getting Alberta oil to foreign markets and more world trade.

Mr. Harper does not have to call an election until 2015.