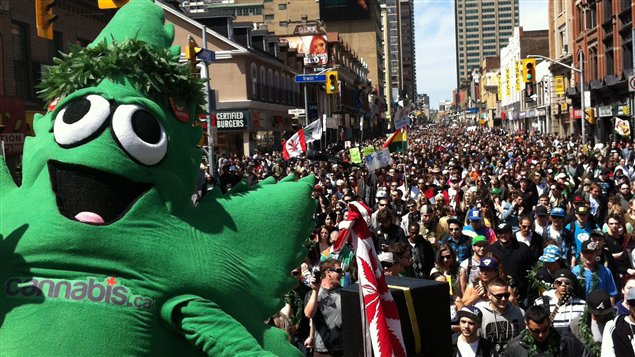 The Global Marijuana March takes place in cities around the world this year on May 3. "The Herb Rocks!" is what organizers of the Toronto event call their mascot, They are expecting from 10-30-thousand people to join this year. Many of the flags shown are not the true Canadian flag, but have had the central red Maple leaf replaced by a marijuana leaf.
Photo Credit: Hand-out

It’s called the “Global Marijuana March” as a demonstration of smoking “weed” as a personal lifestyle choice and as and education campaign for the public. A secondary goal is to get governments that large numbers of people would like governments to relax laws concerning marijuana use an.

It will be staged Saturday May 3, with people in at least 100 cities and probably many more, organizing similar events all around the globe.

One of the biggest, if not –the-biggest will be held in Canada’s largest urban centre, Toronto Ontario.

It’s the 16th annual edition of the GMM, and organizers of the Toronto event are expecting up to 20,000 medical and recreational cannabis supporters and enthusiasts to the city centre.

They want the Canadian government to decriminalize laws on marijuana use as was recently the case in the US states of Washington and Colorado where recreational use is permitted.  Uruguay is the first country to fully legalize pot.

Holland has long been known as being relatively open on “pot”, with small amounts (5gms) allowed to be carried. So called “coffee shops” where cannabis is openly sold and smoked are technically illegal but are widely tolerated as long as only small amounts are sold, no problems are created in the neighborhood, and no hard drugs are present or sold.

Medical use of marijuana is permitted in Canada. Those with medical permission could grow their own limited supply, but that was supposed to end in April with federal legislation to permit medical purchases only from licensed commercial growing operations. Those with medical permission are concerned that their costs will skyrocket. A court ruling has delayed the change and medical users will continue to grow small amounts for their own needs until further notice.

Otherwise, marijuana possession is illegal in Canada, and the current government is intent on keeping it that way and toughening laws further. The two opposition parties are in favour of relaxing the laws, decriminalizing possession of small amounts.

It is expected that marijuana will be smoked at the event, although police have generally tended to “look the other way” unless serious abuse is occurring or drug dealing is seen.