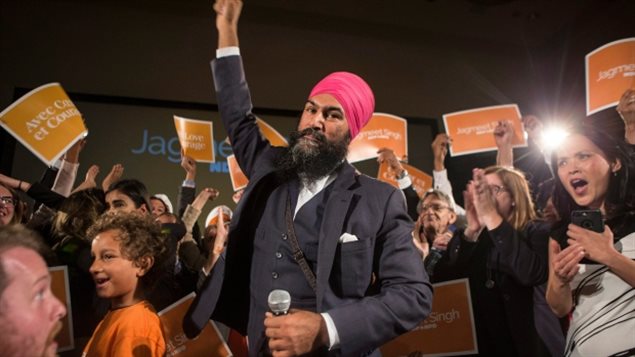 Jagmeet Singh celebrates with supporters after winning the first ballot in the NDP leadership race to be elected the leader of the federal New Democrats, becoming the first member of a visible minority to lead a major federal party in Canada.
Photo Credit: CP Photo / Chris Young

Singh, a turban wearing Sikh who currently sits in the Ontario provincial legislature, is the first member of a visible minority to lead a major federal political party in Canada.

A criminal defence lawyer who speaks fluent English, French and Punjabi, Singh, 38, was born in the Toronto suburb of Scarborough and raised in Newfoundland and Labrador and Windsor, Ontario.

It was a first-ballot victory.

About 124,000 NDP members were eligible to vote for the new leader, either online or by mail, using a preferential ballot that ranked the candidates in the voters’ preferred order.

Unmarried, he has represented the riding of Bramalea-Gore-Malton in the Ontario legislature since 2011 and served as the provincial NDP’s critic for justice and consumer services before being named deputy party leader in 2015.

The NDP currently sits third in the number of seats in the 338-member House of Commons, holding 44. The governing Liberals hold 180 while the official opposition Conservatives hold 96.

Since the death of its former leader Jack Layton in 2011, the party has struggled to attract voters and currently carries $5.5 million in debt.