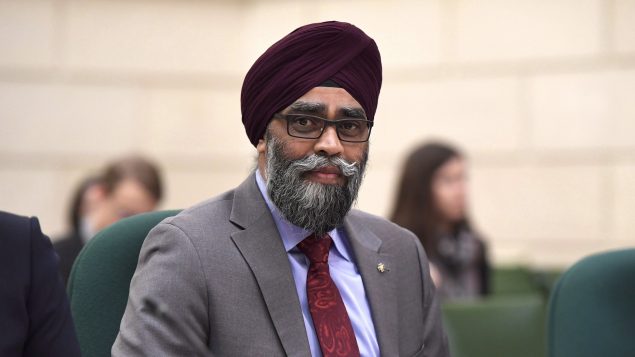 Minister of National Defence Harjit Sajjan appears as a witness at a Commons committee on Supplementary Estimates and Interim Estimates, on Parliament Hill in Ottawa on Tuesday, March 20, 2018. (Justin Tang/THE CANADIAN PRESS)

The federal government is looking for outside help to find solutions for pressing challenges facing Canada in its defence and security sectors, Defence Minister Harjit Sajjan announced Monday.

Ottawa is ready to invest $1.6 billion dollars over the next 20 years to find new and better ways of treating mental health issues in the military, ramping up recruitment of female soldiers, monitor Canada’s waterways and defend against cyberattacks and other emerging threats, Sajjan said.

“Every one of us has an interest in helping us maintain our military’s standing as a force that is agile, flexible and responsive, a military that can and will keep us safe in an increasingly complex environment,” Sajjan said, speaking at University of Calgary.

“The Canadian Armed Forces must constantly adapt to changing and evolving threats. To do that, we need to enlist the ideas and enthusiasm of Canada’s best and brightest minds.”

The Liberals initially announced the Innovation for Defence Excellence and Security program in last year’s defence policy, but potential partners – universities, industry and think tanks – are only now being allowed to apply for the $313 million in funding over the next three years.

The government has identified a total of 16 specific defence and security challenges that it hopes to address with the initial funds, which also includes working with artificial intelligence and improving soldier performance.

Ottawa is also looking for outside help in domains such as surveillance, cyber tools for defence, space, unmanned drones and data analytics.

“Innovation, technology and research are critical to Canada’s security and safety,” Sajjan said. “They help us mitigate threats, stay ahead of our enemies and meet evolving security challenges around the world.”

Interested parties have six weeks to submit their proposed solutions, which must be received by May 24, 2018.