The making of a service dog 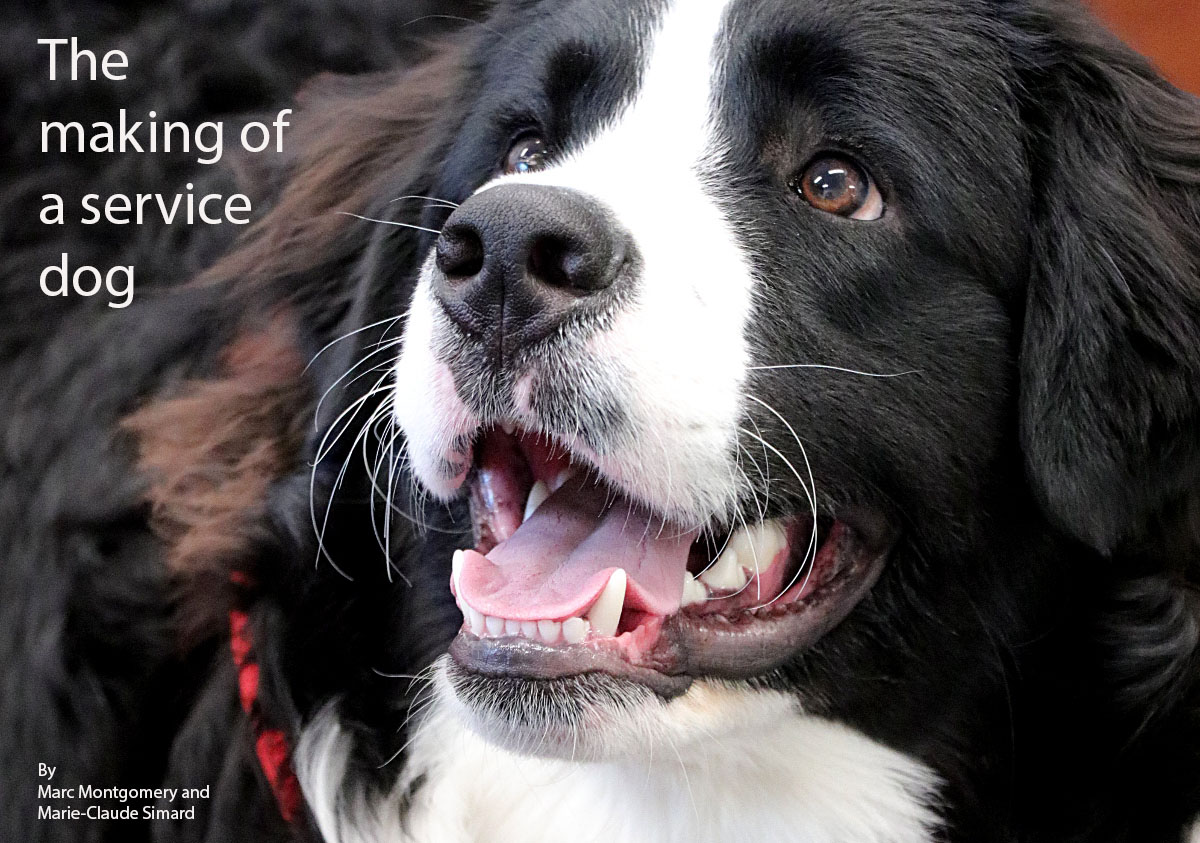 “Schubert-17” at 9-months old is still in the socialisation process with his foster family. A Labernois-St Pierre, in a few months he’ll be returned to MIRA for evaluation by professional trainers to see what his future might be, whether guide dog for the blind, or other assistance or therapy dog work. PHOTO: Marie-Claude Simard/RCI

Depending on the situation they are sometimes called ‘assistance dogs”, therapy dogs” and “guide dogs” (aka seeing-eye dogs). These are all dogs which have been specifically trained to help people with disabilities, whether that be with visual or hearing impairment, mobility issues requiring use of wheelchairs, or conditions like autism spectrum disorder (ASD).

The first and now largest developer and provider of service dogs in Canada is the MIRA Foundation, located in Ste Madeleine Quebec, about 50 kilometres east of Montreal. 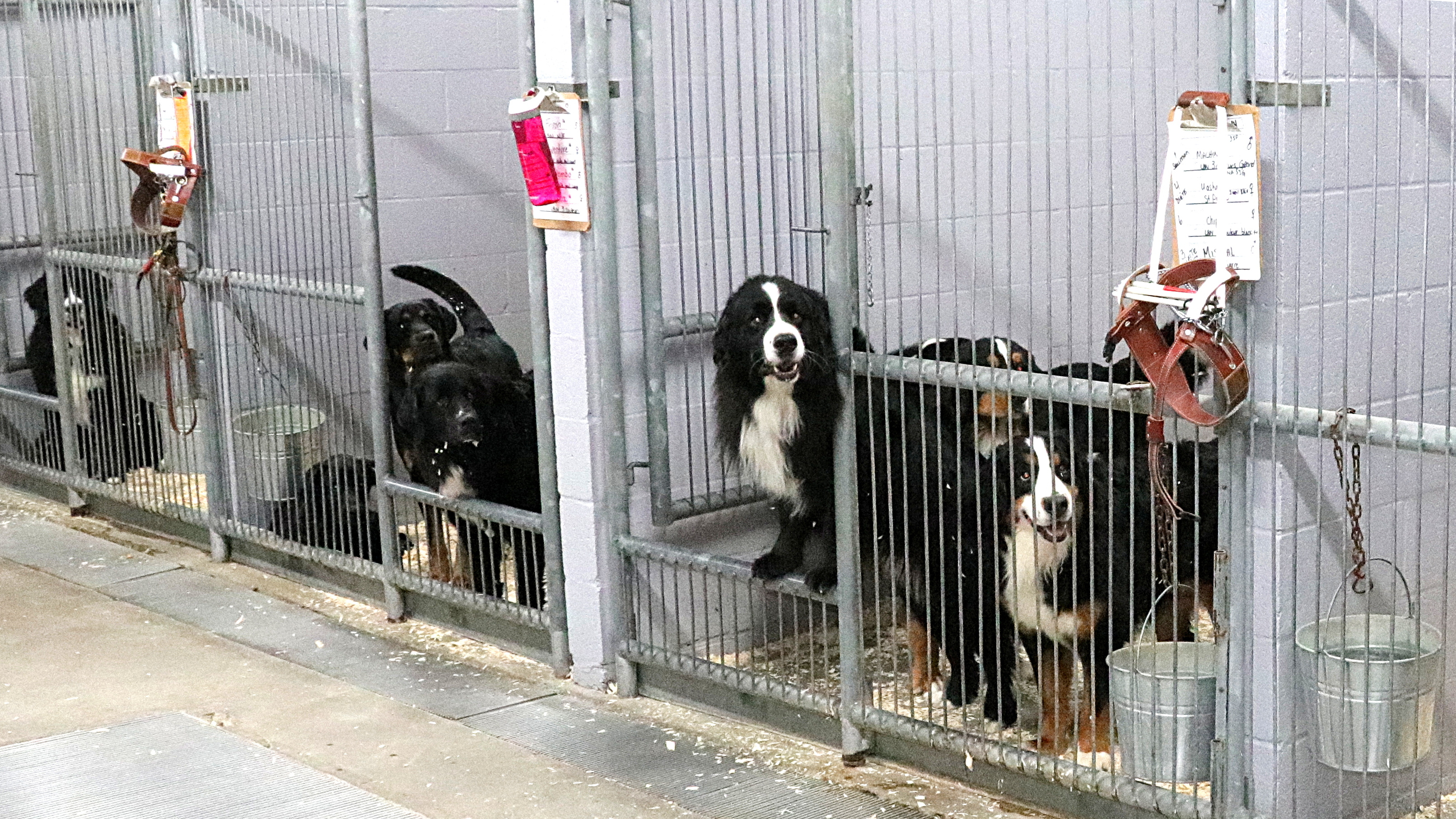 At any given time, MIRA has about 100 dogs in various stages of training and for various roles. Photo:  Marie-Claude Simard/RCI

In fact, prior to MIRA, guide-dogs for the blind in Canada generally had to come from breeders and trainers in the U.S. and there was little proper training for new owners in conjunction with the dogs, and virtually none of the important follow-ups. 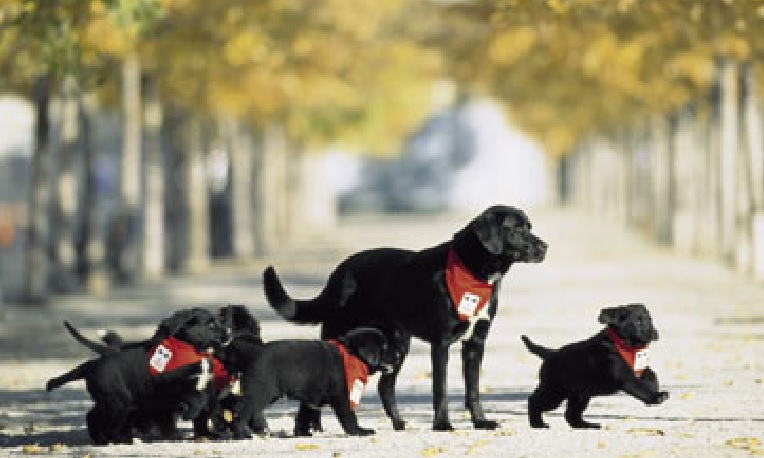 MIRA breeds their own dogs, and after they are weaned at about nine weeks, puppies spend a year or so at foster homes where they are given initial socialisation training. PHOTO- MIRA

The puppies stay in foster homes for about a year. During this time they are taught basic commands and simply getting the animal used to people, noises. They are also taught to avoid being distracted or concerned with other animals like cats, squirrels, other dogs.  Generally the purpose is to socialise the dog to the types of situations and surroundings it will encounter in its later work. Foster families also note the dog’s comportment and any health issues.

Gabrielle Madé and her friend Francis liked the idea of helping out others by fostering the dogs and have just completed a year with Naboo, their fourth MIRA puppy.

After a year, they are returned to MIRA where they receive specialised training for up to several months, More “team” training of varying lengths then takes place with the new owners depending on the type of service the dog will provide.

Many people volunteer as foster homes as they like the idea of having a dog, but not necessarily the long term commitment. but more than that it’s the idea of doing something that will contribute towards helping others in society who are experiencing certain physical or emotional needs.

Corporate sponsors provide for food and some other costs, but it’s not like just having a pet as there are a number of responsibilities involved besides training. Also, although there is a standard process for the foster families to follow, the dogs can have quite different personalities, and sometimes they will not “make the cut” to become a service dog.

Jean-Pierre Boudreault, an administrator at the McGill University Health Centre (MUHC) in Montreal, has been providing temporary foster homes for MIRA dogs for several years. His current foster puppy is “Schubert”, a Labernese. 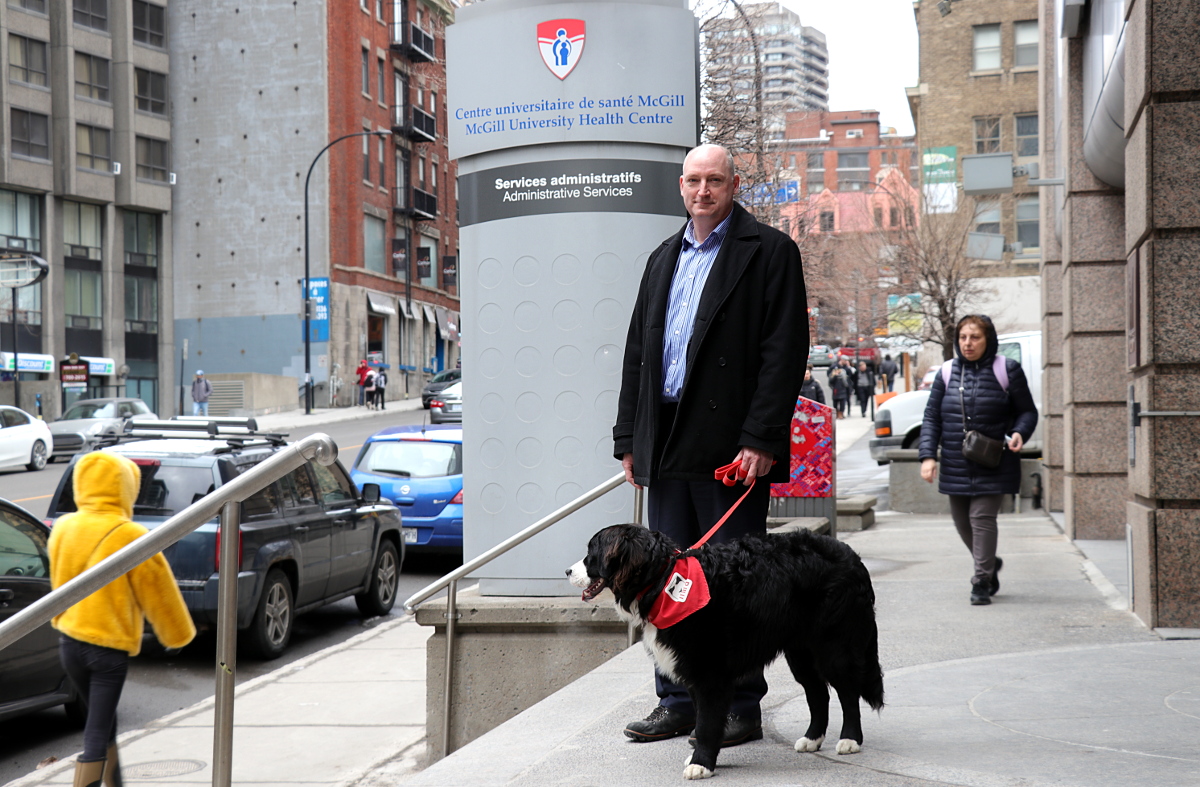 Generally, businesses and public places don’t allow dogs inside, but almost universally, laws stipulate that service dogs and owners are exempt from any such rules or individual policies, and they must be allowed into all public spaces and businesses.

Most places are aware of this obligation toward service dogs and owners but some are not and Boudreault says he has had to explain the situation to people on a few occasions over the years.

MIRA, began its guide dog training programme in 1981, because there really were few resources available in Canada to provide dogs for the blind, and none for French speakers.

As demand grew, the foundation began breeding its own dogs about a decade later. It uses breeds like Labrador (probably universally the most common service breed) as well as the Bernese Mountain dog, Labernese -a lab and Bernese cross (Labernois in French) , and the product of MIRA’s own selective breeding process of re-breeding Labernois which after four generations is being called “Labernois St Pierre” after the founder of the operation, Eric St Pierre. These are now becoming more common as MIRA dogs. 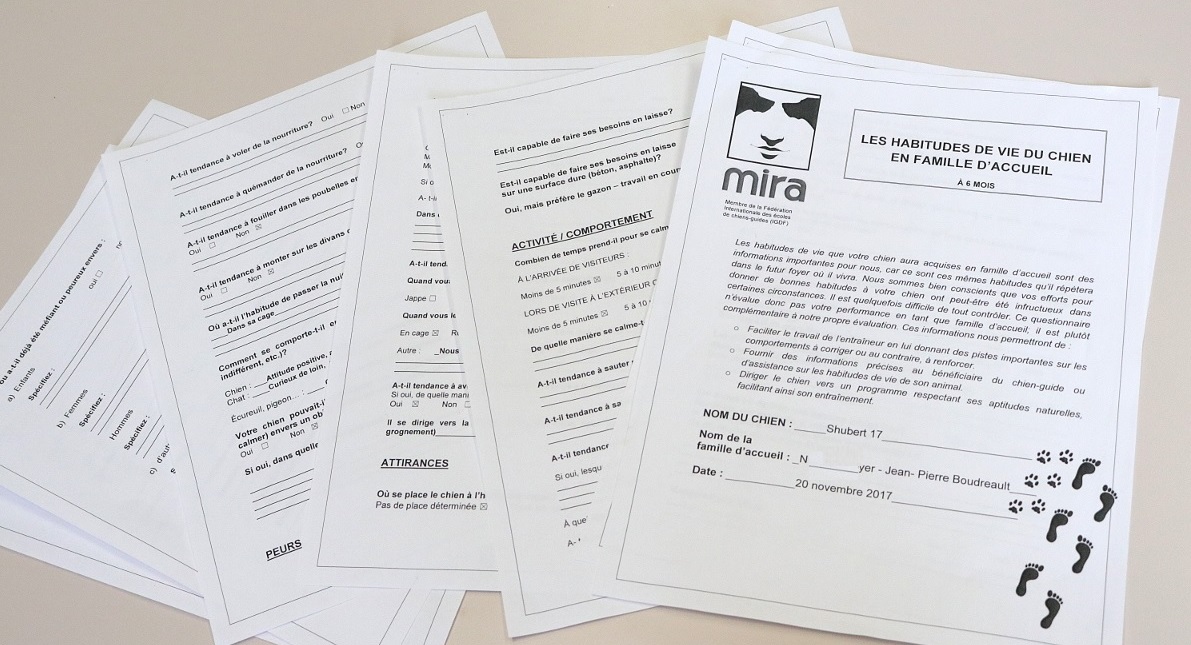 Foster families must regularly complete forms on the dog’s habits and progress. This will aid trainers later and also help determine what path the dog will take in future. PHOTO: Marie-Claude Simard/RCI

While the use of guide dogs has been noted in some texts as far back as the mid 16th century, it really began formally and on a larger scale only following the First World War to help the many blinded veterans.

Training and use of guide dogs began mostly in Germany before spreading elsewhere in Europe, Britain and to the US.

In recent years, use of trained service dogs has been shown to provide a variety of benefits in other situations as well. Examples include assistance dogs trained in special tasks for the handicapped and as emotional supports or therapy dogs, such as for people with autism spectrum disorder. (ASD). 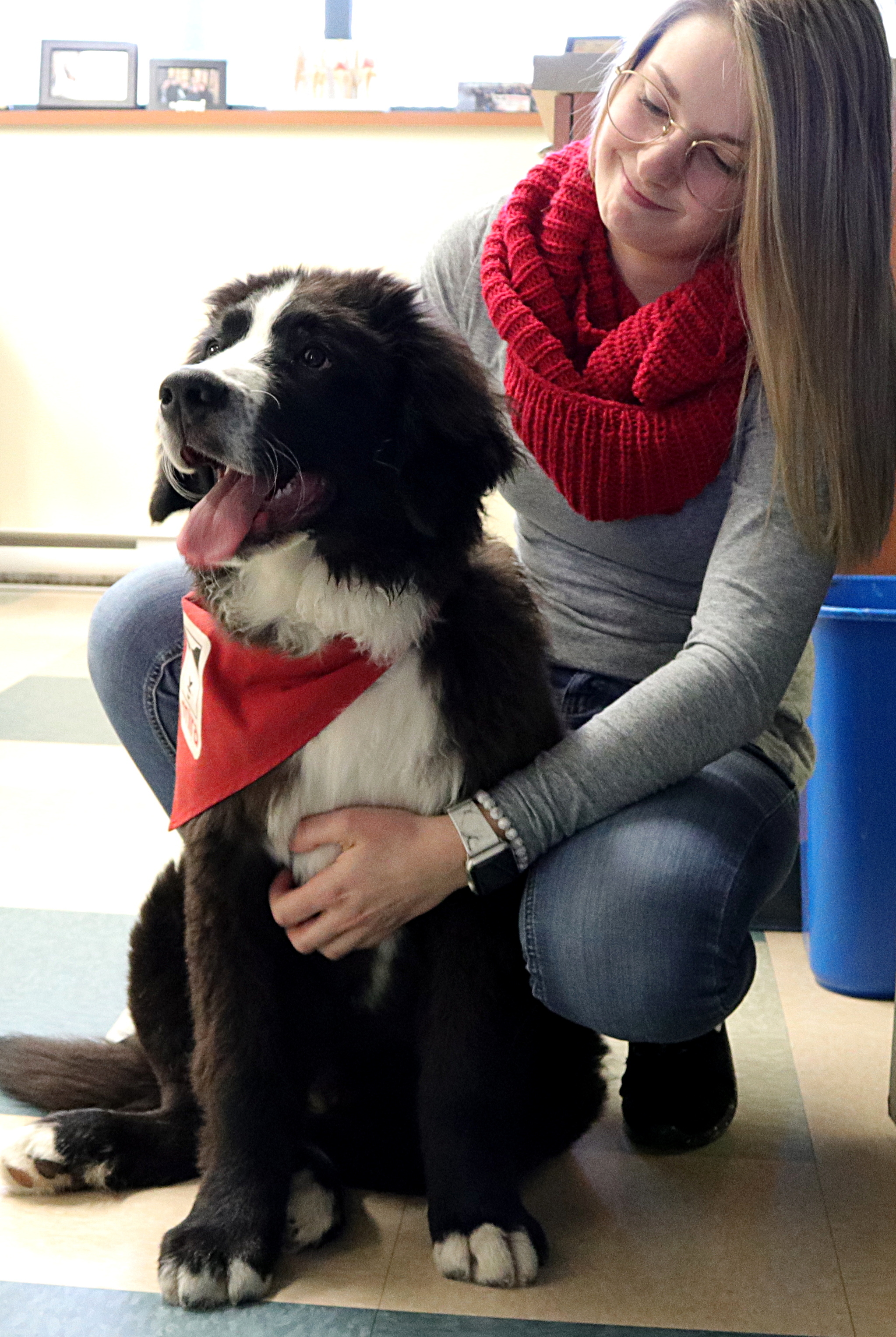 The beginnings of MIRA- largest service dog provider in Canada

The operation began as the first in Canada to train guide dogs and later the first also to breed and provide guide dogs for the blind. However, it wasn’t long before they realised that dogs which didn’t quite meet the strict criteria for guide dogs could still be used with great success as assistance dogs for those with mobility issues requiring wheelchairs. Then starting in 2003, MIRA began studies using their dogs as part of a therapy process for children with autism spectrum disorder (ASD).

Through private donations, fundraising events, and corporate sponsors such as Mondou − the pet food and accessories chain − MIRA has been able to grow through the years to become a multi-function facility. With its own breeding programme, they have been striving to augment the qualities needed in successful service dogs; calmness, obedience and intelligence for example.

Nicolas St-Pierre, the son of the founder Eric St-Pierre, is now the General-Manager.

Although the dogs are provided free to those needing them and meeting the criteria, the cost of the programme is high. When looking at all that is involved, infrastructure, staff, training, food and lodging for recipients in training with their dogs, etc., a successful service dog will have cost about $30,000 by the time it is passed to a person in need.

The dogs begin life at the MIRA headquarters and at roughly two years of age, graduate with their new owners. At any given time there are about 100 dogs in various stages of training. It is a full service operation from beginning to end, including refreshers for the owners and other follow-ups. 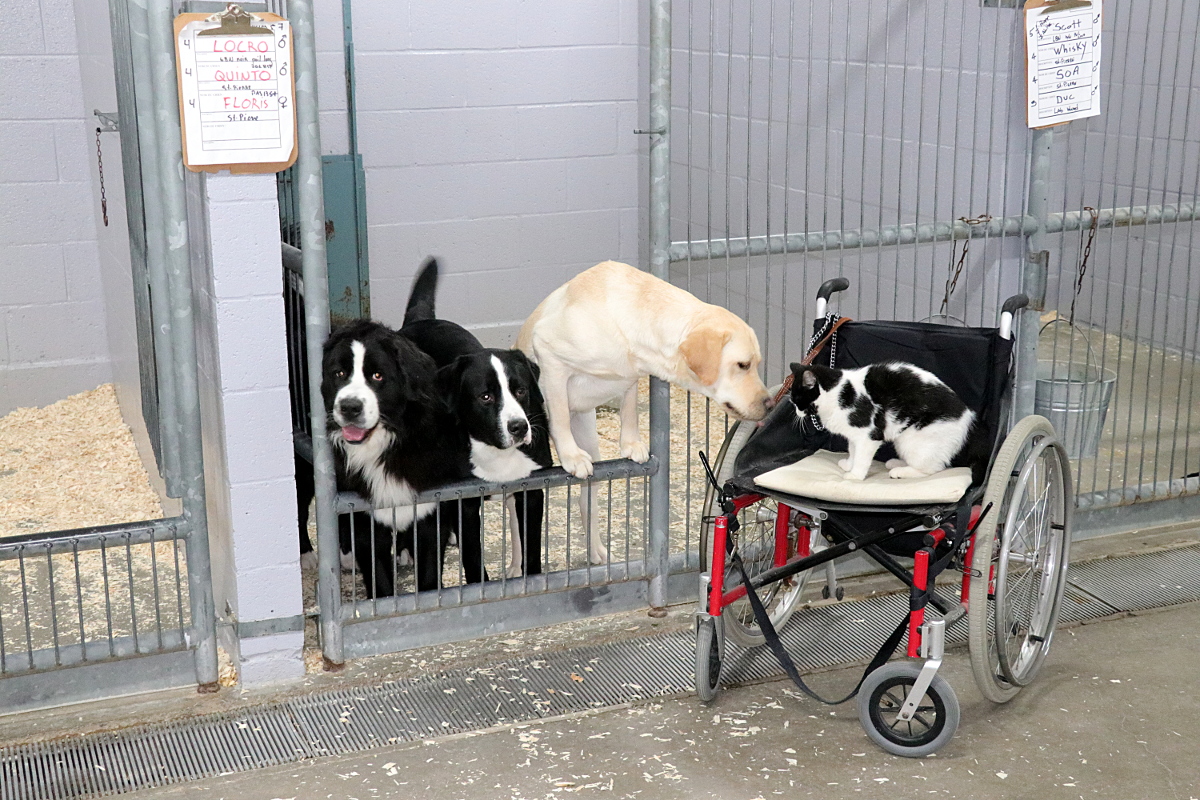 Back at MIRA,more intensive training of the young dogs takes place. Cats play an important role in the training as well, as the dogs must learn not to be distracted from their work by other animals whether cats, squirrels, or other dogs. The wheelchair is used in training of assistance dogs. PHOTO: Marie-Claude Simard/RCI

After the dog returns from the foster family at about a year of age, more formal training at the centre is begun. Eventually it will be seen what the animal’s future role will be based on the trainer’s evaluation. Guide-dog training lasts about eight months, assistance-dog (handicapped/reduced mobility) about 6 months, therapy-autism training lasts about 3 months. Following this stage, the end client, and their families in certain cases, will come to the headquarters where facilities are provided for their stay during the training period in combination with the dog.

Sebastien Massy, who’s been blind since the age of 2, is on his fourth guide dog, Goya. He and his dog form a  team, or as he says a “two-person squad”, adding that when Goya is not with him, it seems like a part of him is missing.

Even though recipients of guide dogs receive training at the MIRA centre, Massy says there’s still a long period of adjustment afterward as each member of the “team”, owner and dog, understand the strengths and limitations of the other member. He says it can take up to a year to fully develop the mutual coordination.

Presently, about half the approximately 200 service dogs that are assigned each year, go toward helping children with ASD.

Although it’s not understood fully why it helps, studies conducted at MIRA in 2006 and 2017 show a clear reduction in the levels of stress hormones in the children and in other members of their families when the child is given a trained dog.

Research by staff and others has shown that the dogs best help ASD children who are between the ages of roughly 5-12, and who are in the middle of the autism range. 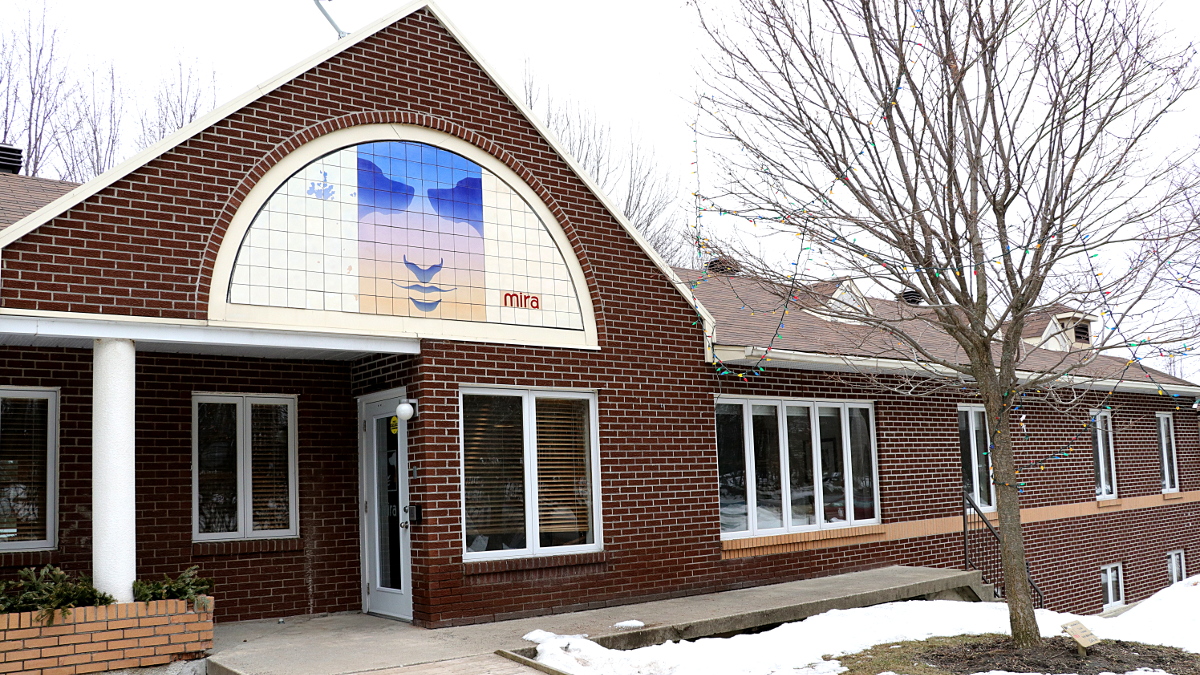 One of the site’s several buildings, this one where ASD children and families can stay during evaluation and habituation with a dog PHOTO: Marie-Claude Simard/RCI

Psychologist Noel Champagne and Masters-student in psychoeducation Charlotte Belanger-Moses, work with ASD children and families at the facility.

Staff at the headquarters facility range from administrative personal to veterinarians, trainers, psychologists and psychoeducators, augmented by a number of volunteers who help out in a variety of the tasks needed to run a complex operation. 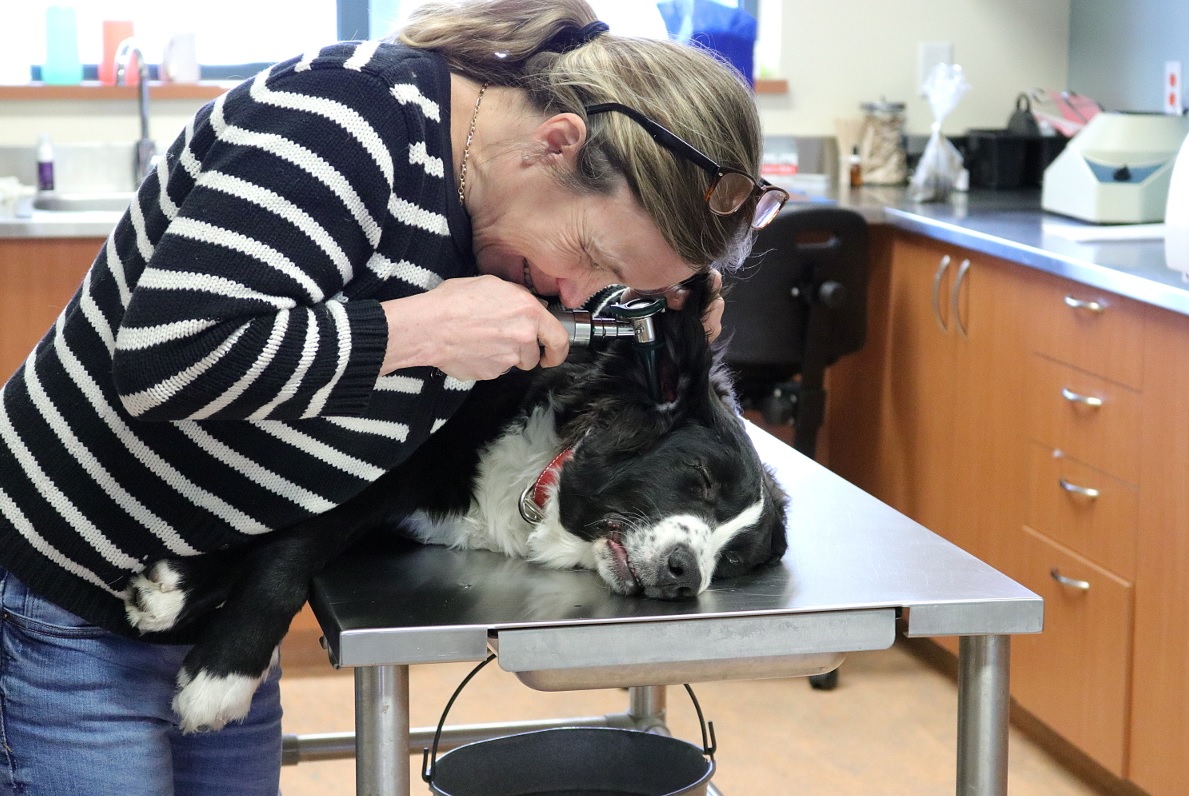 The MIRA headquarters complex also includes a well-equipped veterinary clinic including an operating room, and x-ray equipment. This is to ensure the dogs are healthy and free of genetic defects as well as providing for their long term health. PHOTO: Marie-Claude Simard/RCI

The centre is always busy with families and dogs coming and going. Foster families with their dogs come back every three months to have the dog’s comportment and physical condition evaluated. Individuals and families with various needs come for evaluation to see if a dog will suit their needs, while others assigned a dog are housed at the facility for specific training with their new dog. The length of the stay also depends on the role, whether,for visual, auditory or mobility handicaps, or families of children with ASD. 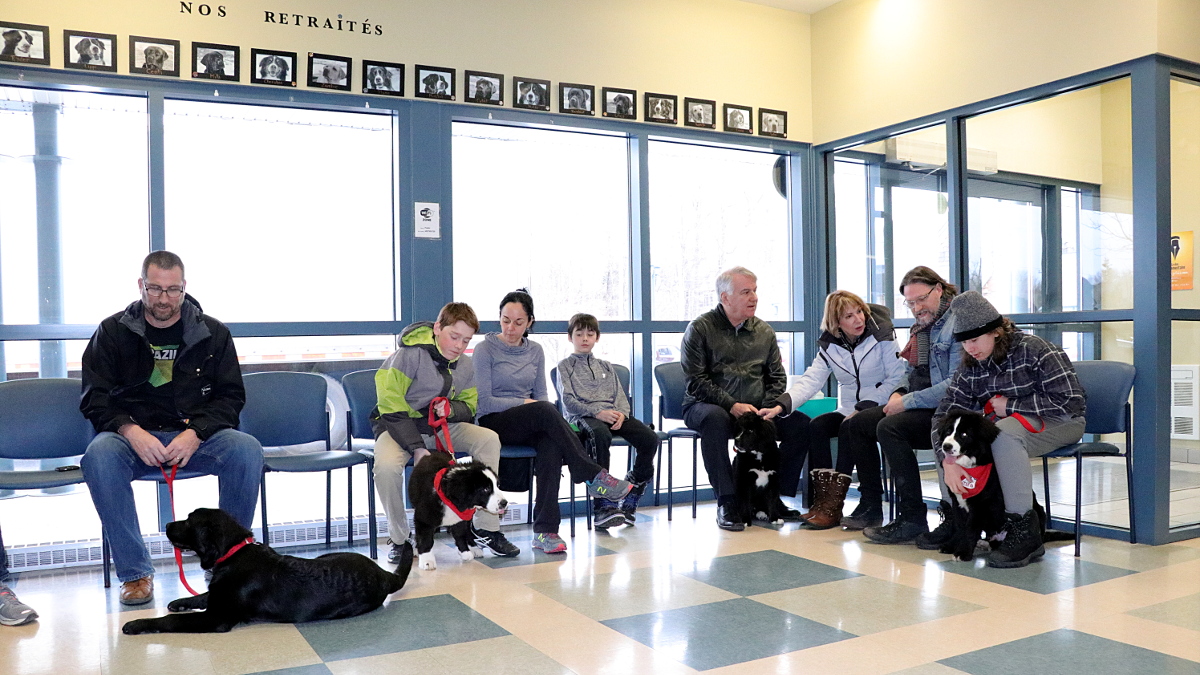 Foster families have to bring the dogs back to MIRA every three months for check-ups and reports on comportment . PHOTO: Marie-Claude Simard- RCI

Groups of dogs are also coming and going as they continue with the professional trainers who take them into urban situations for more intense training involving such things as street corners, puddles, barriers, construction sites etc’. while teaching the dogs to maintain focus in spite of the variety of sights, noises, smells, and crowds they will later encounter when working. 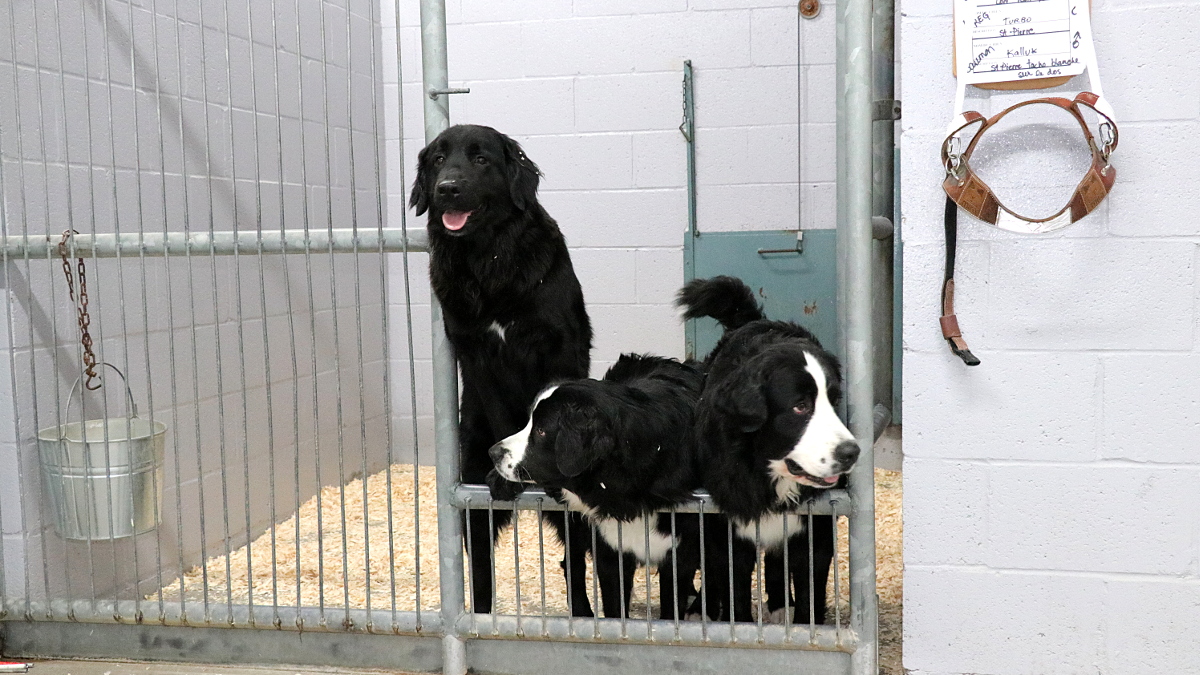 The dogs are generally retired after about 7 years of service as they age, thus the need for this service is ever-present and growing. 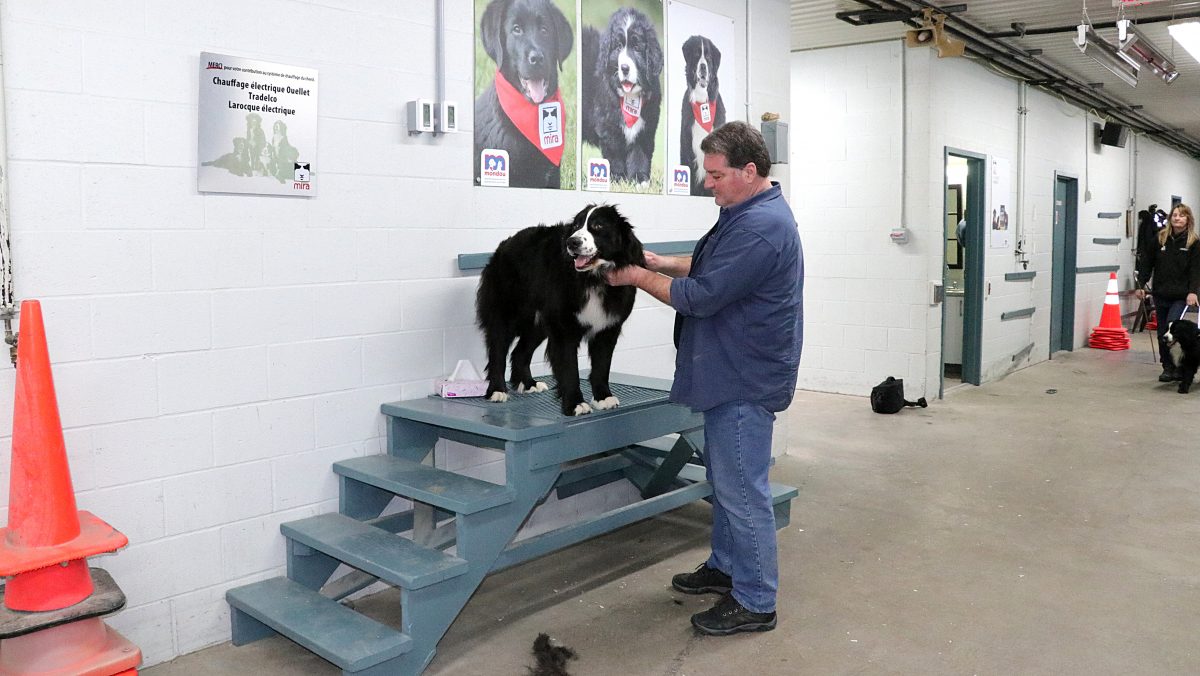 All aspects of the dogs health are carefully looked after including such things as regular grooming, an important aspect to their overall health and well-being. PHOTO: Marie-Claude Simard/RCI

Nicolas St Pierre says the operation is constantly receiving letters of heartfelt appreciation from recipients expressing gratitude for how the dogs have benefited them and improved the quality of their lives. MIRA is proud to help people and make a difference, he says.

Of course everyone involved in the operation enjoys the experience of working with the dogs, but more than that, there’s a ongoing sense of accomplishment in doing their part in making society a better place as expressed by Gabrielle Madé.

7 comments on “The making of a service dog”