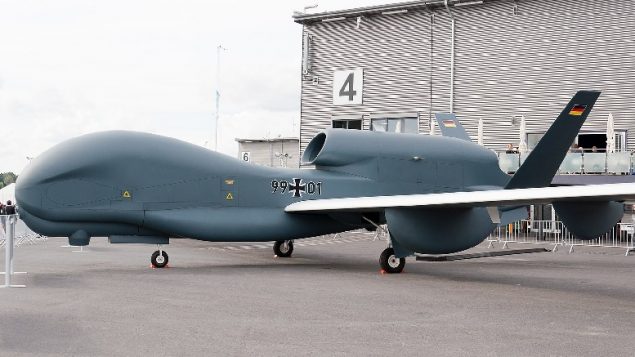 A full size mockup of the American made Euro Hawk drone at a Berlin airshow in 2012. Germany cancelled the contract for four drones and is trying to cut its losses and sell off its prototype of the seven tonne drone which is as big as a commercial jetliner. (Julian Herzog-wiki commons)

Canada-German deal reported to be possible

Germany is trying to sell off a huge military drone that it has barely used but which has cost it over 700 million Euros.

Canada is said to be a possible buyer even though the drone will be missing critical components and barely able to fly.

In an email to RCI, a Canadian Forces spokesperson it is not the Canadian military that is interested, but a PostMedia story says the apparently interested party could be Transport Canada and the drone could be for Arctic surveillance. This would be for such things as monitoring ship traffic, oil spills, and ice conditions.

The American-made Global Hawk variant “Euro Hawk”, prototype was purchased by Germany in 2000. However, it was later discovered they couldn’t get approval for it to fly in Europe due to flight safety issues.

An official statement in May 2013  said rumours about the problems were inaccurate, and development would proceed. 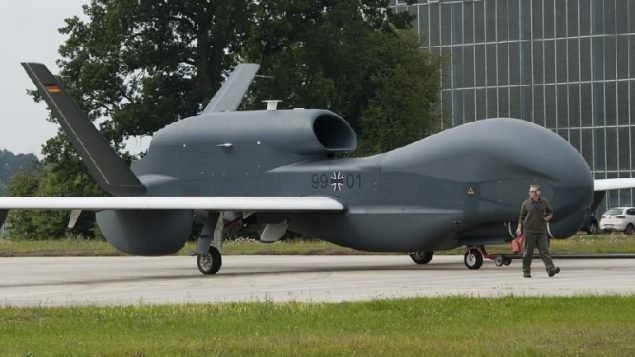 July 21, 2011 the reconnaissance drone prototype ‘Euro Hawk’ is moved at the air base in Manching, Germany. Germany wants to sell a second-hand drone that’s cost the country over 700 million euros ($823 million) to Canada, without many core components it needs to fly. (Armin Weigel/dpa via AP, file

However, with no air certification and with costs mounting for further trial flights, the German Defence Ministry cancelled the contract for more of these reconnaissance drones.  With the Euro-Hawk prototype sitting in storage since 2013, the Defence Ministry decided to unload the drone rather than continue with mounting costs. First however it was required to disable and delete highly sensitive U.S. software. Instead of spending time to do that, they simply removed key component hard drives like the GPS receiver and antennaes, certain telemetry equipment, encryption, and flight control systems.

The Associated Press report says the government is in talks with Canada for the drone, two ground stations and possibly some spare parts. There is no word on price or sale date.  Analysts suggest that without those key flight components, the more than half-billion dollar drone really has only scrap value.

Germany is reported to still be in the market for drones, and possibly armed drones as well.

This would not be the first time Canada bought used military equipment.

In 1998 Canada spent $750 million on four used submarines from Britain. The subs however have been plagued from the beginning with a variety of problems keeping them more often in drydock undergoing expensive repairs. A fire aboard one cost the life of a Canadian sailor during the transit to Canada. The subs were built in the late 1970’s and  had been decommissioned by Britain in 1994

The Liberal government has said it will keep the old technology diesel-electric subs operational until 2030, with some projecting those costs to be $2.5 billion.

The Liberal government also announced plans to buy up to 25 used F-18 fighter jets from Australia, to replace several of its own CF-18 jets. Some of the used jets will likely be used as “parts planes” to keep the others flying.

The deal came after a dispute with Boeing which resulted in Canada saying it would not buy F-35s to replace its ageing CF-18 fleet.