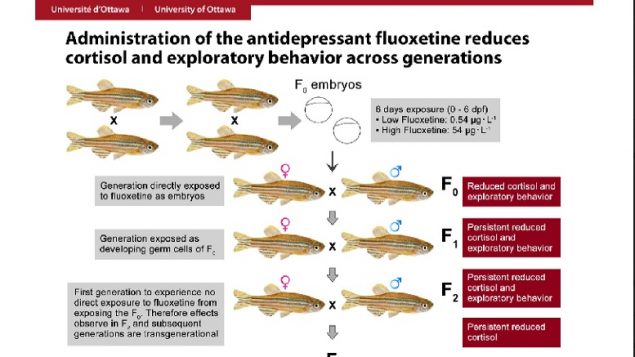 Discovery of lingering effects of anti-depressants across generations

Researchers in Ottawa have been studying the effects of a common anti-depressant, Prozac, on the environment. When people take Prozac or other pharmaceuticals, some of it passes out of the body into sewage systems to waste treatment plants, and then into the environment with trace amounts still present. The researchers had been studying short term effects on reproduction of fish, but when they began to study if there were long-term effects, they found a surprise.

The anti-depressants change the body’s production of cortisol. When we encounter a stressful situation, the body produces cortisol to help react to it by increasing metabolism and sending a message to the brain to react quickly such as to flee from a dangerous situation for example. 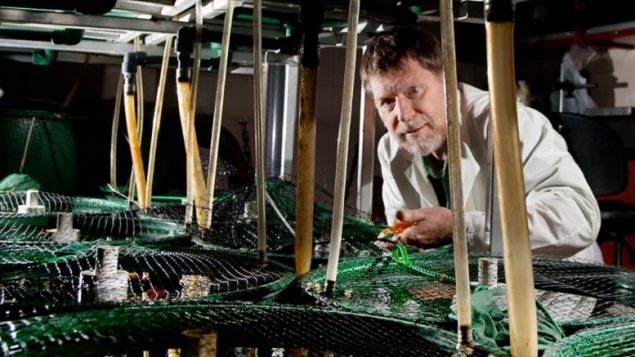 What the research discovered is that an embryo of a small zebrafish or goldfish, when exposed briefly to the drug, the effects of reduced cortisol production lasted not only in that fish, but continued in its offspring and even into a subsequent generation.

The experiment involved embryos exposed to the fish sized equivalent of a human dose, and also to the much smaller trace amounts that might make it into the environment. 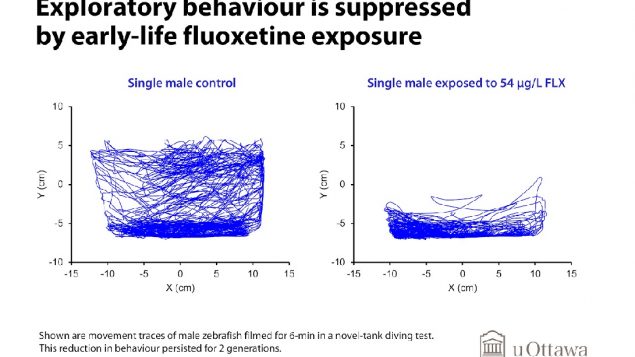 Showing track of normal untreated fish at left actively exploring the new tank environmentm while a fish treated at left, sticks mainly to the bottom (Vera-Chang et al, U Ottawa)

The research was published in the journal PNAS, under the title Transgenerational hypocortisolism and behavioral disruption is induced by the antidepressant fluoxetine in male zebrafish Danio rerio”  (abstract here)

They noted that behaviours remained changed in the offspring to the third generation even though they had no direct exposure themselves.

Professor Trudeau says that a similar study involving humans is being carried out by researchers in British Columbia where he says they are discovering similar effects in the first generation of children.

In terms of the environmental effect, Trudeau notes that the ability to explore one’s environment and to react appropriately to stressors is essential to the survival of a species.

Professor Trudeau and lead author Marylin Vera-Chang  say that while these are beneficial drugs, indeed life-saving on occasion, the study indicates that we may want to add some caution as their findings show that medication can have longer term effects than ever imagined and that what we put in our bodies could have implications for generations down the line.