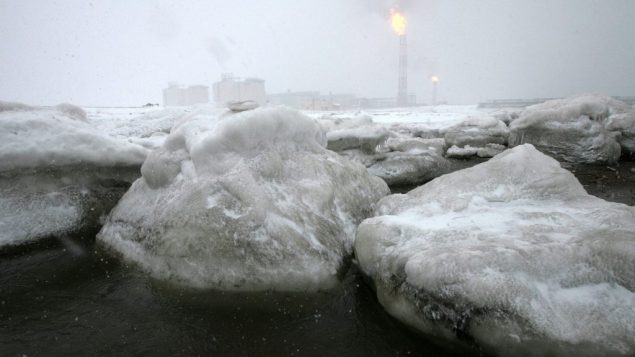 Gas flares, a producer of black carbon, go off at a an unnamed liquefied natural gas plant on Sakhalin island in Russia's Far East. Finland, current chair of the Arctic Council, says Russia and the United States are hindering circumpolar cooperation efforts to reduce the harmful pollution. (Natalia Kolesnikova/AFP/Getty Images)

Black carbon pollution remains a pressing concern in the Arctic, but the U.S. and Russia are thwarting regional co-operation efforts to combat the problem, says Finland’s Ministry of Foreign Affairs.

The Arctic Council, an international forum made up of the world’s eight circumpolar countries, which includes Finland; and six Arctic Indigenous groups, has made fighting black carbon a regional priority because of its role in warming the atmosphere.

When black carbon is deposited on ice and snow, it absorbs heat, instead of reflecting heat from these surfaces, contributing to global warming. Approximately one third of Arctic warming is caused by black carbon emissions from circumpolar countries.

The Arctic Council has made black carbon a priority since 2015 when it adopted the “Enhanced Black Carbon and Methane Emissions Reductions: An Arctic Council Framework for Action.”

Finland is currently nearing the the end of its leadership of the Arctic Council. The chairmanship rotates through member countries every two years.

Finland’s Ministry of Foreign Affairs says that while the majority of Arctic countries have managed to reduce their emissions, not everyone has been on board.

“The United States has withdrawn from common reduction goals, and Russia has not submitted its national calculations on black carbon emissions.”

After carbon dioxide, black carbon is the second biggest contributor to warming.

The Arctic Council’s black carbon working group will submit their next progress summary, along with recommendations for further reducing emissions, at the Arctic Council ministerial in Rovaniemi, Finland.

The ministerial is also where Finland will hand over chairmanship of the Arctic Council to Iceland.

Sweden: After the IPCC’s devastating report, what can Sweden do to fight climate change?, Radio Sweden