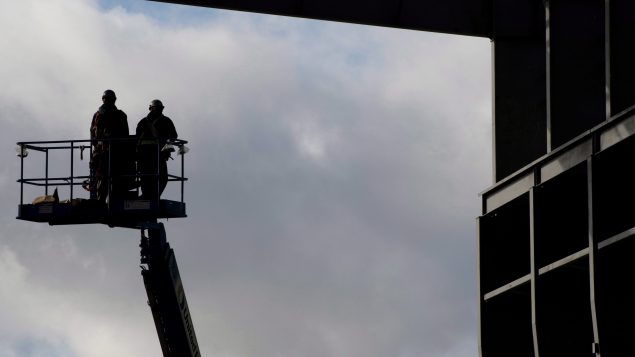 Workers are pictured at the Vancouver shipyard in an Oct. 7, 2013, file photo. The economy blew past projections by expanding at an annualized pace of 3.7 per cent in the second quarter, giving Canada its strongest three-month stretch of growth in two years. (Jonathan Hayward/THE CANADIAN PRESS)

Despite a slight drop in domestic consumption, the Canadian economy surprised economists by expanding at an annualized pace of 3.7 per cent in the second quarter largely fueled by a healthy 3.2 per cent rise in exports.

The latest reading for real GDP shows an unexpectedly solid turnaround for an economy that was coming off its weakest back-to-back quarters of growth since 2015 and blew past the Bank of Canada’s forecast and consensus expectations by major economists.

“The Bank of Canada can take some solace that, while some overseas economies are teetering on the edge of recession, Canada just posted a growth rate miles above potential, which likely soaks up much of the slack which had previously opened up,” said CIBC economist Royce Mendes in a research note to clients.

The better than expected headline growth rate was driven by stronger exports and housing numbers.

The advance, however, was led by a rise in oil exports following the easing of Alberta’s mandated production cuts which came into effect earlier in the year, Mendes noted.

Residential investment came back to life after contracting in each quarter since the end of 2017, on the back of condominium and apartment building activity combined with higher home resales, he said.

Nathan Janzen, senior economist with RBC, said from the Bank of Canada’s perspective, though, the second quarter report will do nothing to alleviate concerns about the slowdown in global economic growth, which in turn is bound to slow the Canadian economy going forward.

“We continue to expect the Canadian central bank will follow other global peers with a rate cut,” Janzen wrote in an analysis of latest numbers. “Probably not at next week’s policy decision but with the risks tilted to an earlier cut than the first quarter of 2020 move we have in our current base case.”