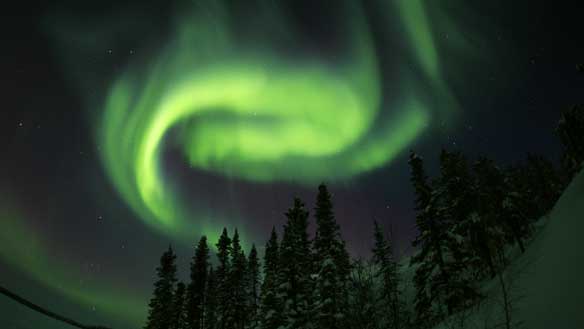 Canada’s northern lights are coming to the rest of the world, thanks to a new webcam being launched by the Canadian Space Agency.

The space agency has teamed up with partners in Yellowknife and Calgary to develop the AuroraMax website for which webcams set up around Yellowknife will capture real-time images of the aurora borealis.

A colour “all-sky imager” is the main camera behind the AuroraMax live feed. Two digital cameras with fisheye lenses are also being used on occasion.

Even on cloudy nights, the light-sensitive lens on the all-sky imager should be able to pick up some of the northern lights, said James Pugsley of Astronomy North, one of the AuroraMax partners.

The bright aurora displays occur when charged particles in bursts of solar wind from the sun’s surface collide with gases in the Earth’s upper atmosphere. The energy resulting from these cosmic collisions shows up as billions of tiny flashes that, seen in sequence, look like green, violet and red dancing lights.

While a rare sight in most parts of the world, the aurora borealis can commonly be seen in the Yellowknife area, Pugsley said. “Yellowknife is situated perfectly underneath the aurora oval, which is this zone of geomagnetic activity. Well, that’s a big reason why we see northern lights on a regular basis,” he told CBC News on Monday.

“The idea is if we can watch the sun and the aurora, we can learn about the relationship between sunspot activity and auroral activity.”

The AuroraMax project is being launched in time for scientists to observe the solar maximum, the period in which the northern lights are expected to be more frequent and active. Originally forecast to occur in 2012, the solar maximum is currently expected to take place in 2013.

To coincide with the launch of the AuroraMax website, Astronomy North has begun a notification system to advise aurora-watchers of the next big light show.

“If you get an alert on your phone and on your screen that the aurora is coming out later tonight — or perhaps you’ll get an alert saying it’s out right now — that tells you to drop what you’re doing, close the phone, turn off the computer and go outside,” Pugsley said.

Pugsley said while the AuroraMax cameras will provide people outside the North with a virtual view of the northern lights, he hopes it will encourage them to visit Yellowknife to see the real thing in person.

Other partners in the five-year AuroraMax project include the University of Calgary and the City of Yellowknife.