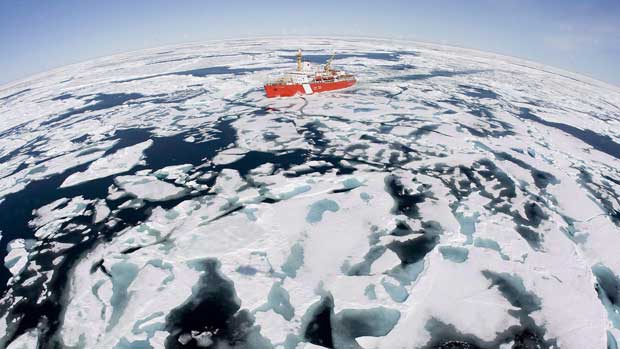 Arctic mariners will have better access to weather data and navigational warnings in the Northwest Passage and other northern waterways, where marine traffic is expected to pick up as the sea ice shrinks.

Kent said in the next five years, those services will be available around the clock, year-round, as opposed to being available only on a seasonal basis.

“It will allow us to provide Arctic mariners with daily weather and ice information essential for safe routing through ice-infested waters,” he told reporters in Yellowknife on Tuesday.

“The service will also provide mariners with navigational information with weather warnings and other safety messages.”

Federal officials say Canada is committed to the International Maritime Organization to ensure ships navigate safely through the Northwest Passage and its adjacent waters north of Alaska and along part of Greenland’s western coast.

Canada maintains that the Northwest Passage is a Canadian waterway, while the United States and other countries have argued that it is an international passage.

Information bulletins will be set out over the INMARSAT-C satellite, over DFO’s high-frequency radios in areas where there is no satellite coverage, and through existing domestic channels.

In a release, federal Fisheries Minister Gail Shea said the funding will allow the Canadian Coast Guard to improve its coverage of parts of the Arctic that are not covered by satellite.

The station in Resolute is the third to receive data from polar orbiting satellites. Environment Canada has two other stations in Edmonton and in Gander, N.L.

Seven locations are already up and running. By the time the two other sites are implemented this summer, the Weatheradio service will be available to 93 per cent of the Northwest Territories, Kent said.

This week marks Kent’s first visit to the Northwest Territories as environment minister, and he is expected to hear aboriginal leaders’ concerns about a recent federal decision to open up a wilderness area to mining.

The Dehcho First Nations has already asked the Federal Court to overturn the Indian and Northern Affairs Department’s decision to remove the ban on subsurface mining on the Horn Plateau.

The Dehcho Dene consider the Horn Plateau — about 25,000 square kilometres in the south-central part of the territory — a sacred place and an important hunting ground.

Called Edehzhie in the Slavey language, the plateau is a habitat for various bird and animal species and is known to have potentially significant oil and gas deposits.

In its application to the Federal Court late last year, the Dehcho First Nations says Ottawa’s decision to remove the subsurface mining ban — while keeping a ban on surface activities such as logging — breaches an agreement made through the N.W.T. Protected Areas Strategy.

“We’ve got to have it both, top and bottom, protected in order for it to be effective,” Dehcho Grand Chief Sam Gargan told CBC News on Monday, referring to surface and subsurface protection.

“If you only have the Protected Areas Strategy that doesn’t protect the bottom, then it’s really a mockery.”

Kent and Gargan are expected to fly over the Horn Plateau so the minister could get a better idea of why aboriginal groups and the N.W.T. government want the area to be protected.