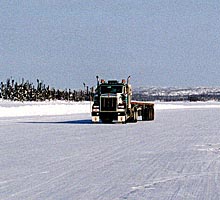 Winter roads that provide an important link to Arctic communities and mines will become increasingly inaccessible as the climate warms over the next 40 years, scientists predict.

“In Canada, in particular, we project about 400,000 square kilometres of area that … for climatic reasons, will no longer be suitable for winter roads,” said Scott Stephenson, a graduate student in geography at the University of California, Los Angeles, and lead author of the study published this week in Nature Climate Change.

Winter roads are built from compacted snow and ice across frozen ground, lakes, rivers and swampy areas across large areas of the north in Canada, Finland, Greenland, Iceland, Norway, Russia, Sweden and the U.S.

In Canada alone, there are 5,400 kilometres of such roads.

However, winter temperatures are expected to rise four to six degrees Celsius by 2050, and the researchers predict that will reduce winter road access in Canada’s Arctic by 13 per cent.

Many of the communities connected by the roads are small and remote, so it isn’t economically viable to replace the ice roads with all-weather roads.

In Trout Lake, N.W.T., home to less than 100 people, an ice road allows diesel trucks to carry several seasons’ worth of food and supplies into the community each winter.

Trout Lake resident Dennis Deneron said the road is already less dependable. Members of the community built a snow bridges over creeks where the water was still running.

“And it got too warm, so it gave out, and I’ve got trucks stuck on both sides,” he told CBC News.

Tom Hoefer, president of the Northwest Territories-Nunavut Chamber of Mines, said his industry could be hard hit.

“Our diamond mines are entirely dependent on our winter roads,” he said.

The study also predicted that by 2050, it will take 6.5 days to travel from Yellowknife, N.W.T., to Bathurst Inlet, Nunavut, compared to 3.8 days now, due to the deterioration of the winter roads.

Stephenson said many communities that rely on winter roads may need to be supplied in future by more expensive air cargo services.

“That would make life that much harder in these communities,” he said in a statement.

Hoefer said it is vital that the government invest in more permanent roads — expected to cost roughly $1 million per kilometre — or companies may move their operations to other countries.

The researchers used computer models to predict average month-to-month accessibility rates to winter roads by a two-tonne vehicle — about the size of standard sedan — for 2010 to 2014 and for 2045 to 2059, based on current climate predictions. They expect accessibility to be lower for large trucks.

In addition to looking at how Arctic land routes would be affected by climate change, the researchers also examined accessibility by sea by mid-century from July to September along four Arctic shipping routes:

They predicted that only the Northwest Passage would not be fully passable for the entire summer, but even it will be 30 per cent more accessible.