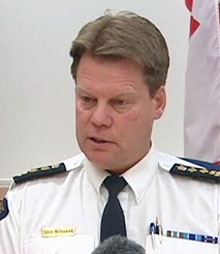 Iqaluit, capital of the northern Canadian territory of Nunavut, will host a first-ever meeting this fall of police chiefs from across the Arctic, including chiefs from Greenland and Alaska as well as Canada’s territories.

The meeting, taking place Sept. 20 and 21, will give northern police chiefs an opportunity to learn from each other and discuss issues of common interest, said Nunavut RCMP Chief Supt. Steve McVarnock.

McVarnock said he usually meets with his counterparts from Yukon and the Northwest Territories twice a year, but he is expanding the guest list for the Iqaluit meeting.

“I wanted it to be a total pan-Arctic theme because we all face the same challenges,” he told CBC News on Tuesday.

Law enforcement and social services working together: a model?

In addition to police chiefs from Greenland and Alaska, McVarnock has also invited Chief Dale McFee of the Prince Albert Police Service in Saskatchewan to talk about a strategy that force has to help at-risk young people.

McFee said his members meet regularly with representatives from local schools, social service agencies and First Nations to identify those who are headed for trouble, such as a 14-year-old girl whose grades started plummeting at school.

“They sent a social worker, a police officer and a health worker to meet the young girl, and they went in there and said, ‘What could we do to help?’ Young girl breaks down; [it] turns out the mom’s got into bad domestic violence,” he said.

McFee said police and social services staff worked together and intervened early enough to stop the violence and hopefully prevent the girl from heading down the wrong path.

McVarnock said he believes a similar strategy could work in Nunavut “so that they don’t go from breaking a window today to committing second-degree murder two years from now, because of a cycle that is failing them.”

McVarnock said he has invited Nunavut health, social services and education officials to the September conference, to help foster a spirit of cooperation.

“Everybody’s got their respective areas of responsibility, we’re not quite sure what the other’s doing. And I think there are some efficiencies that can be gained by working a little more integrated.”