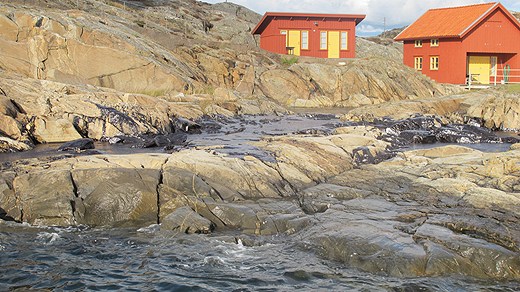 Workers have been battling bad weather all week in Sweden’s Gothenburg archipelago as they try to clean up the oil that is in the water and washing ashore.

Tor Haugen, who works for the municipality of Tjörn, an island community of around 15,000 people in Sweden’s southwest, is running the cleanup operation.

He says the’re finding more oil than they expected.

The weather was cooperating on Wednesday, so workers are back on the boats and on the rock cliffs cleaning up the thick fuel oil.

But officials, who say it is the worst spill since 1987, still do not know where the oil came from.

Haugen says around 100 people are picking up oil from the coastline and waters. “So far we’ve collected 250 tons of oil and it’s quite difficult to get to it because it’s very thick and near the coastline so big vessels have no access to it,” he says.

In some places, because of the heavy seas and wind, the oil has washed ashore 25 to 50 meters inland.

“It’s a mess,” he says. “The smell is of heavy oil. If you’re working in it you get headaches and become dizzy. This is an environmental disaster”.

Officials expect that people will find oil in the area for some time. Work is still underway to find the source of the spill.