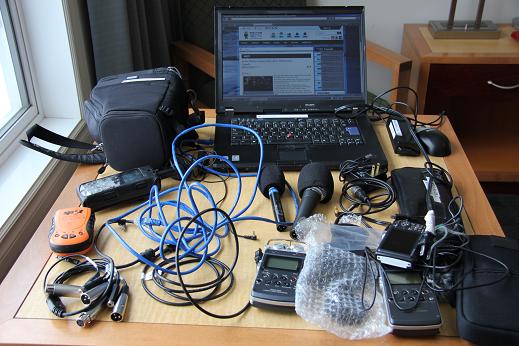 Going out on the land during winter in the Arctic requires so much stuff: massive Sorel boots, socks, gloves, under gloves, goggles, a balaclava, hats, scarves, snowpants, long underwear, layers of thick sweaters …  The list goes on and on.

My kit for going out on the land needs its own suitcase and it’s really, really heavy. So because I’m going to be jumping in and out of a lot of small planes on this trip I wanted to keep things simple and cut down on equipment.

Then I had the clever idea of stuffing all my recording and camera equipment into the pockets of my Arctic parka and eliminating the need for an extra bag.

Well at least it seemed like a good idea at the time.

I regretted it almost as soon as we left Montreal. Not only were gear and wires spilling out of my coat pockets but the weight and bulk of it all rendered me almost completely immobile.

Case in point: our plane was late landing in Winnipeg so we had only six minutes to make the connection to Edmonton. The flight attendant told all Edmonton passengers to debord first and run to the gate so they wouldn’t miss the connecting flight. The other passengers took off out of the plane as soon as the ramp was set up.

The best I could muster was a brisk waddle.

I told a fellow passenger in her 60s to go on without me and tell the crew I was coming as fast as I could.

It’s days like that, that make me wish I was still a newspaper reporter with nothing other than pen and paper to worry about.