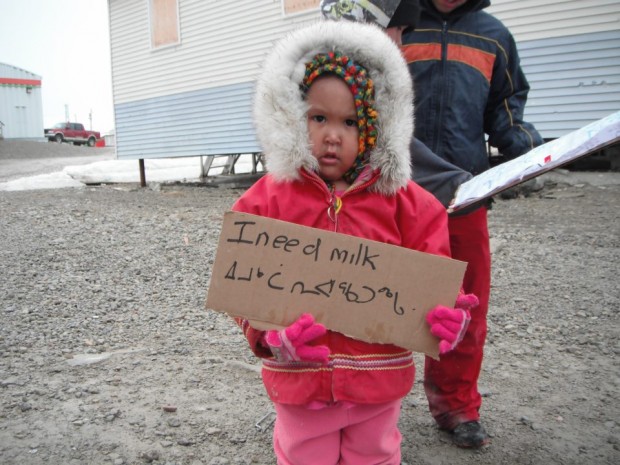 Protests against the high cost of food took place across Nunavut and in Ottawa Saturday.

The issue has drawn more attention in recent weeks since the UN Special Rapporteur on the Right to Food visited Canada last month.

The Facebook group ‘Feeding My Family’ asked its members in Nunavut to gather outside the main store in their community on Saturday to protest the high cost of food. The group, which was started about two weeks ago, now boasts more than 15,000 members.

In Iqaluit, about 30 people gathered in an empty parking lot across the street from the city’s largest grocery store.

The protest began with a prayer in Inuktitut and English.

Leesee Papatsie is the Iqaluit woman who started the Facebook group to organize the protest.

Protesters carried signs with prices of food listed on them – butter at $7.49 and $19.29 for a three-litre jug of orange juice.

In communities in the High Arctic, like Grise Fiord, two litres of milk costs $14.

While the cost of food is expensive, there are subsidies in place. Last year, the federal government introduced the Nutrition North Canada program to replace the old Food Mail program.

Nutrition North is meant to subsidize healthy, perishable foods more heavily. The subsidy goes directly to retailers and suppliers, who must pass on the savings to consumers.

But some say the program still needs much improvement. Ronald Elliott is the member of the legislative assembly for the High Arctic communities of Resolute, Arctic Bay and Grise Fiord.

“Nutrition North, if I was asked if it was helping or not helping, in terms of providing the highest subsidy on the most nutritious food, it is. I don’t think they have the whole program correct yet,” he said.

Some Nunavummiut are upset that basics, like flour, are not subsidized under the new program.

Hunting not an option for all

One alternative to buying expensive products shipped up from the south is to go hunting on the land, as suggested by Federal Health Minister Leona Aglukkaq. But former member of Parliament Jack Anawak said that people on income support cannot afford the snowmobiles, boats, gas and ammunition needed to get country food. Hunting could also mean missing a day’s wages.

“They may forego some other things that they need to pay off in order to put food on the table, the country food, which is the most nutritious food,” he said.

Across the street from the protest in Iqaluit, Crystal Ningeongan left North Mart with her two children and a bag of groceries.

The protesters said they want the federal government to step in more.

491 ♥ Inuit gov. in Atlantic Canada calls for people to stop travel to and from their region

342 ♥ Is Norway's farmed salmon as healthy as we think?