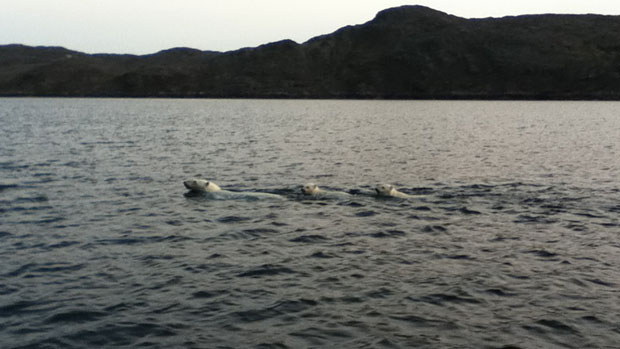 Mother and cubs startle resident on their way to the sea

A woman in Kimmirut, a community of around 400 people in Canada’s Far North, got the fright of her life on Sunday when she walked out of her house and encountered a polar bear and her two cubs.

Kamigaq Aqpik was leaving her home to walk downtown like any other day when out of the corner of her eye she spotted the bears less than three metres away.

Aqpik lives by the airport in Kimmirut and was able to make it back into her house safely and let her husband know there were bears outside.

Officials were called to scare the bears off.

Chris Wex, the wildlife officer in Kimmirut, said the bears passed through the hamlet in about 20 minutes on their way to the sea.

“They had gone from one end of the runway where there are new houses where they were first seen and down the runway, down the bank and into town and then probably a hundred metres from where they came off the runway to the sea. It was very quick.”

Eyewitnesses said the bears did not seem to be looking for food and that they were in good shape.