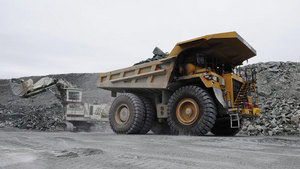 With global commodity prices slowing, the economy of the North isn’t going to be as strong as predicted this year but it will still outperform the rest of the country, according to the Conference Board of Canada.

The board’s latest economic forecast for the territories says growth in the North will slow down in the short term but forecaster Marie-Christine Bernard said it’s not all bad news.

“For the next few years it’s looking quite positive if we compare it to the rest of Canada,” she said. “It’s not as robust as we expected six months ago, but it’s still quite good.”

Bernard said this year gross domestic product in the North should increase by 3.6 per cent, compared to 2.2 per cent across the country.

That’s due to the mining industry, which will keep the economies of Canada’s eastern Arctic territory of Nunavut and its northwestern Yukon territory growing. Both Nunavut and Yukon have new mines expected to open soon, but the same can’t be said for Canada’s Northwest Territories.

“We’re going to see a decline in real GDP in 2013 and 2014 and that’s due to the diamond industry that’s quite mature up in that territory,” she said.

Bernard said there aren’t any mines on the horizon in the Northwest Territories which can replace the production output of the Ekati and Diavik diamond mines, both of which are expected to reach the end of their lives in the next decade.