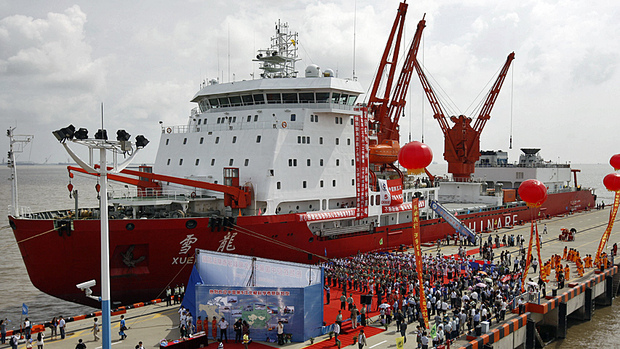 China has been eager to gain a foothold in the region

A Chinese icebreaker docked Thursday at Shanghai after becoming the first vessel from China to cross the Arctic Ocean, a landmark trip that is part of Beijing’s efforts to expand its presence in the Arctic.

With melting icecaps accelerating the opening of new shipping routes and the exploration of oil, gas and mineral deposits in the Arctic, China has been eager to gain a foothold in the region.

The icebreaker Snow Dragon returned to Shanghai after wrapping up a three-month mission that took it from the Pacific Ocean to the Atlantic via the Arctic, the Shanghai-based Polar Research Institute of China said in a statement. The vessel’s 119 crew members completed an oceanic survey in waters around Iceland with their Icelandic counterparts.

Though it has no territorial claims in the Arctic, China has been lobbying for permanent observer status on the eight-member Arctic Council in a bid to gain influence.

During summer months when they are passable, Arctic shipping routes between China and Europe are 40 per cent faster than travelling through the Indian Ocean, the Suez Canal and the Mediterranean Sea.

The institute’s statement said Snow Dragon gained “first-hand information about navigation in Arctic sea lanes as well as the oceanic environment, and carried out useful exploration and practice for our nation’s ships that use Arctic passages in the future.”