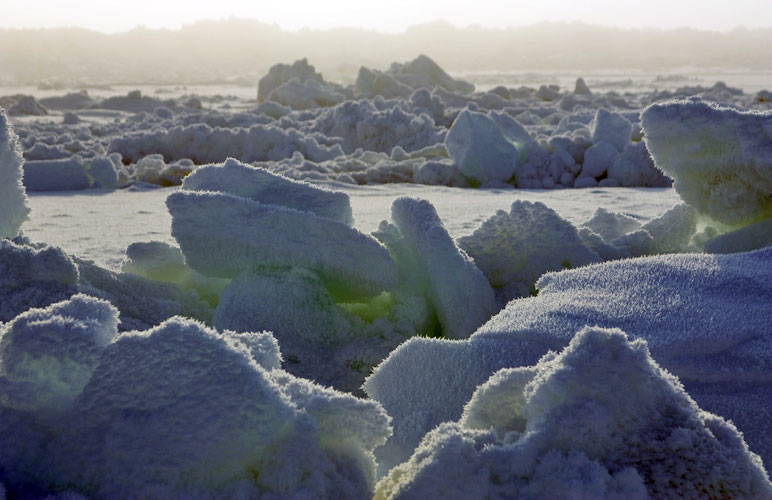 Even as Arctic sea ice shattered record lows earlier this year, on the other side of the globe, Antarctic ice was setting a new record of its own, growing to an area larger than any before, according to the National Snow and Ice Data Center (NSIDC) in Colorado.

The NSIDC has had a busy summer: in August, the all-time record for minimum Arctic sea ice extent was set with weeks remaining in the melting season.

By the time the ice stopped melting on Sept. 16, another chunk of ice the size of Texas had melted away, and the final sea ice tally was only about half that of the 1979-2000 average.

But while that extent was making headlines, on the other side of the world, a different story altogether was playing out. On Sept. 26, Antarctic ice broke a record of its own. On that day, it covered 7.51 million square miles, beating the 2006 record for largest extent ever.

In a season-end analysis of the conditions, the NSIDC put some of the record-breaking melt and freeze into context.

According to the NSIDC, this year’s record-breaking ice melt differed from 2007’s in a significant way, since 2007 was a year of extreme temperatures and weather in the Arctic, where this year was relatively calm. Additionally, the loss of “old” Arctic sea ice in recent years has led to larger patches of new ice more prone to thawing.

“However, even with … replenishment, this winter will see only approximately 20 percent of the old (5+ year) ice compared to the 1980s,” the NSIDC reported. “Because of the record summer ice loss, this winter will see the Arctic Ocean region even more dominated by the thinner first-year ice. (T)he amount of ice in nearly all age categories has decreased since 2007, particularly the oldest ice.”

Meaning the cycle of record-breaking thaws is likely to continue, barring a particularly cold season in the near future.

Meanwhile, in the Antarctic, where the Southern Hemisphere’s winter has just drawn to a close, the seasonal change that takes place with the ice is much less extreme than in the Arctic. The Antarctic only gains about 6,200 square miles of ice every year, “roughly an area the size of Connecticut,” the NSIDC said. In comparison, the Arctic is much more prone to flux, losing more than 35,000 square miles of ice in the same time-frame.

Climate change skeptics like to point to the persistent Antarctic ice as evidence that global warming is less extreme than many studies have suggested. But there may be some problems with that talking point, as some researchers point out.

“Antarctic sea ice hasn’t seen these big reductions we’ve seen in the Arctic. This is not a surprise to us,” NSIDC director Mark Serreze told the Christian Science Monitor recently. “Some of the skeptics say ‘Well, everything is OK because the big changes in the Arctic are essentially balanced by what’s happening in the Antarctic.’ This is simply not true.”

The rate at which the Arctic is losing ice, especially that “old” ice, far outweighs the rate at which the Antarctic is gaining ice. The New York Times points out that much of it can be attributed to the different physical characteristics of each pole, and the NSIDC itself notes that the weather in Antarctica also plays a significant role in increasing the winter ice pack.

“Small changes in winter extent may be a more mixed signal than the loss of summer sea ice extent,” the NSIDC said. “An expansion of winter Antarctic ice could be due to cooling, winds, or snowfall, whereas Arctic summer sea ice decline is more closely linked to … climate warming.”