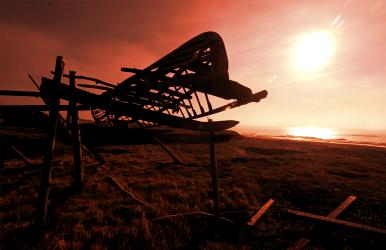 When Arctic sea ice dipped to a new record low earlier this year, scientists began to look harder than ever at the possible reasons why the northern ice cap has seen such marked declines.

Now, a new study released Wednesday suggests that shifting wind patterns in the world’s far north might be to blame — and could also be wreaking havoc on weather systems in the U.S. and Europe.

According to the National Oceanic and Atmospheric Administration, which helped lead the study with researchers from institutions in New Jersey, Washington and the United Kingdom, winds that used to go west to east are now shifting to a north-south pattern.

Additionally, that new pattern moves in peaks and valleys, helping deliver warmer air to the north and the Arctic’s cooler air to the south.

That shift may have a profound impact on Arctic ice, which has seen record low levels in recent years, first in 2007, then again this year, breaking the record in August with weeks to go in the summer melt season. Baffling to researchers was the relatively mild weather in the Arctic in 2012, compared to 2007’s much warmer and stormier season.

And while Arctic ice loss is cause for concern, perhaps the more pressing issue for the world’s population is the changing wind’s effects on weather elsewhere on the globe. In particular, the weather in North America and Europe could see weather that once was considered extreme become the new normal.

As the Guardian reports in the United Kingdom, this year saw records broken in the country for the wettest April and May on record, with a near-record low level of sunny days in June. Meanwhile, the country’s northern neighbor, Greenland, saw plenty of sun.

“The past six summers have been duller and wetter than the long-term average,” the Guardian reports. That coincides with the six-lowest levels of Arctic sea ice on record, from 2007-2012. That wet, cool weather also meant a rough year for farmers in the UK.

All of this sounds similar to what happened in parts of Alaska recently. In Southcentral, temperatures were cooler than average — July in Anchorage was one of the coldest ever — and wet weather and wind were the name of the game in September for much of southern Alaska. The Northwest region of the state also saw heavy rain and cooler temperatures.

Many Alaska crops suffered like those in the UK. In the Mat-Su Valley, crop yields were down significantly due to cool, wet weather. Temperatures were also cool in much of the Interior, though one silver lining in that region was the corn crop.

Meanwhile, in the Lower 48, the story was much different, with record heat and drought persisting across much of the contiguous U.S.

The Intergovernmental Panel on Climate Change has previously warned that as the earth warms, weather that used to be unusual or even extreme for certain regions could become much more common, and that people should prepare themselves for these new normals.

The newest study would seem to reinforce that assessment.

“Researchers say that with more solar energy going into the Arctic Ocean because of lost ice, there is reason to expect more extreme weather events, such as heavy snowfall, heat waves, and flooding in North America and Europe but these will vary in location, intensity, and timescales,” NOAA reports.

“What we’re seeing is stark evidence that the gradual temperature increase is not the important story related to climate change,” said Jennifer Francis of Rutgers University and one of the authors of the new study, “It’s the rapid regional changes and increased frequency of extreme weather that global warming is causing. As the Arctic warms at twice the global rate, we expect an increased probability of extreme weather events across the temperate latitudes of the northern hemisphere, where billions of people live.”