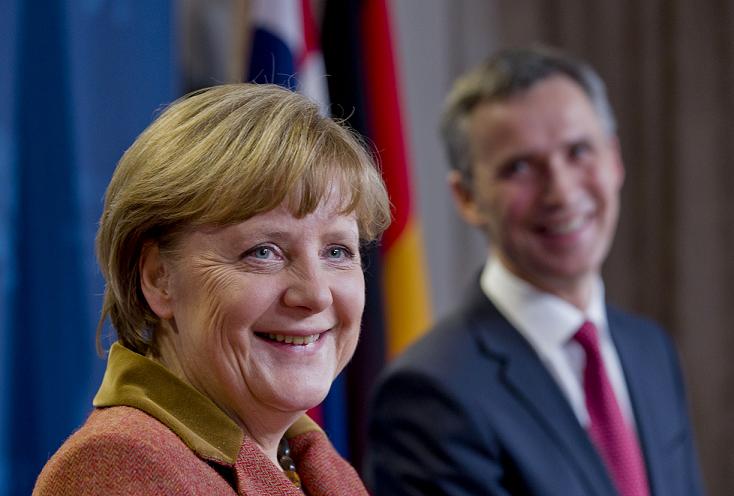 German Chancellor Angela Merkel traveled to Oslo this week to meet with Prime Minister Jens Stoltenberg to discuss the euro crisis and energy issues, including cooperation in the Arctic. This was the pair’s fifth meeting in nine months.

Stoltenberg stressed the importance of German and European companies in assisting with the development of the Arctic region. After his meeting with Merkel, he remarked, “We also touched on the North and the Arctic, and the possibilities inherent in the North, both energy and other resources.

Here, I conveyed that it is important that more good effort involved to develop this important region. This applies to Europe as a whole, including Germany and German industry.” Some progress on building collaboration took place this week at a state dinner attended by Merkel, Stoltenberg, and Minister of Petroleum & Energy Ola Borten Moe. Over dinner, representatives from the German energy companies RWE-Dea, Wintershall, Voith, and VNG, which currently operate off Norway, discussed issues with Statoil delegates.

Norway has typically welcomed involving non-Arctic states in economic activities in the region. It is even to more political involvement: for instance, it officially supports South Korea’s bid for permanent observer status in the Arctic Council. While diplomatic ties with China have been frosty since the decision by the Nobel Committee to award Chinese dissident Liu Xiaobo the peace prize in 2010, there have been reports of regularly occuring secret meetings between Norwegian and Chinese diplomats. Earlier this month, Foreign Minister Espen Barth Eide announced, “The process has been particularly active in recent months. We have got the clear impression that China wants to normalize relations, and that they consider it to be in their interest.” He also commented that he believes the country’s growing interest in the Arctic is behind its newfound friendliness. Willy Lam, a professor of political science at the Chinese University of Hong Kong, stated in an interview with Aftenposten (translated from the Norwegian): “China has a growing interest in the Arctic, where Norway is a major power. Therefore, they want a normal relationship. In addition, they probably see that their furious reaction against Norway has backfired.”

While Norway probably will not be exporting oil and gas to China anytime soon, Germany, the largest economy in Europe, is a significant buyer of exports. In 2009, Germany relied on imported energy to meet over 60 percent of its needs. Norway was its second bigger supplier of both oil and gas: 16 percent of all oil comes from its northern neighbor, while 33 percent of its gas does (the percentages are approximately the same for the EU as a whole). The number one supplier of fossil fuels is Russia.

Thus, in light of the EU’s energy roadmap to 2050, which seeks to reduce greenhouse gas emissions to a mere 5% to 20% of 1990 levels, and move towards renewables, Statoil is seeking affirmation from Berlin that the country will continue to rely strongly on natural gas, even though production is set to decline by 2020.

In 2009, natural gas met 24 percent of German energy needs and oil another 32.9 percent. Renewables (hydro, geothermal, solar and wind) only constituted 2 percent, but the country hopes to increase its share, perhaps to the detriment of Norwegian deficits. For a time, things were looking rosy for German imports of oil and gas. In 2011, partly due to the fallout from the Fukushima disaster in Japan, Germany announced that it would phase out nuclear power. Yet instead of oil and gas meeting the new gap, the drop in the price of coal in Europe has allowed it to play an important role in the German energy mix.

Stoltenberg commented, “We are of course concerned that lower coal prices have led to increased coal consumption in Europe, which has reduced demand for Norwegian gas, but believe that the gas has a future in Germany.”

Merkel noted that with the low price of coal in Europe, it is difficult to make power plants that run on natural gas competitive. “It is difficult for the new gas-fired power plants in Germany to compete on price with this will change over time.”

Norway also exports excess hydrothermal electricity to Germany. Statkraft is working on a new subsea power cable from Norway to the continent to export even more renewable energy. So while the outlook is rosy for Norwegian hydropower exports, if the country wants to capitalize on the new finds in the Barents Sea, Skrugard and Havis, more work needs to be done to expand the infrastructure for transmitting oil and natural gas from the Arctic, whether by ship or pipeline. While all the excitement is over trying to transport fossil fuels to the east over the Northern Sea Route, Norway cannot lose sight of the existing markets to the south on the continent.