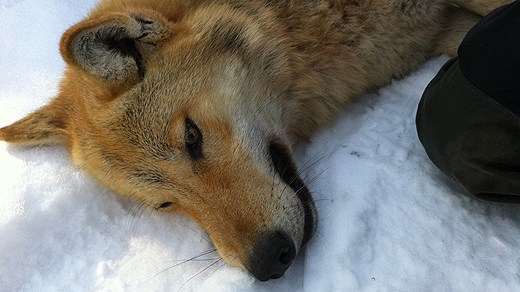 The fate of a wolf in Sweden’s northern village of Junsele has sparked strong reactions among animal lovers, environmentalists and indigenous Sami reindeer herders.

The wolf, nicknamed Susi by her supporters, has a 20,000 strong fan base on Facebook. She comes from Finnish-Russian stock which makes her valuable for Sweden’s inbred wolf population.

But she also represents a powerful symbol in a longstanding conflict over how wolves fit in to Swedish society.

The Junsele wolf has been moved away from reindeer herds four times – at a cost of SEK2 million – but keeps returning to the same area.

This time it took two weeks to walk the 500 kilometres from the south where she’d been dropped off.

Ruona Burman, wildlife management coordinator at the Swedish Environmetal Protection Agency, says she will not be moved again, even when reindeer herds return from their spring grazing areas.

450 ♥ Inuit gov. in Atlantic Canada calls for people to stop travel to and from their region

413 ♥ Is Norway's farmed salmon as healthy as we think?

352 ♥ Mass grey whale strandings may be linked to solar storms