Canadian politicians can claim Santa Claus as a Canadian citizen if they want, but they’d be best to make him wait in line like all the other law-abiding immigrants.

On the other side of the Arctic Ocean, there is a dour, steely-eyed Russian by the name of Vladimir Putin who doesn’t care whether Paul Calandra, the prime minister’s parliamentary secretary, and Liberal Leader Justin Trudeau want to claim old St. Nick as our own or not.

The Russian president just wants to make sure that Canadians and the rest of the world know his country has planted a flag on the North Pole and he’s daring us to come and pull it down.

Well, someone in the Canadian government took Putin up on his challenge and — Santa-silliness aside — we’re claiming the Pole, too.

“Of course you’re going to go for the maximum knowing that you’re going to have to negotiate back. That’s just international diplomacy,” argued the University of Calgary professor and Arctic specialist.

Trudeau can invoke Santa’s citizenship and then leave the decisions to the scientists, as he said last week on CBC News Network’s Power & Politics, but Huebert said it’s going to take more than bathymetric coordinates to beat Moscow.

“If you’re negotiating with Russia, you want to make sure that you’ve got all your ducks in a line. And second of all, the Russians historically have always seemed to respect those that will understand that this is a hardball game,” he said in an interview.

Russia’s ambassador, Georgiy Mamedov, said as much on Dec. 6, the day Canada submitted its scientific findings on the extension of Canada’s undersea geography to the UN Commission on the Limits of the Continental Shelf.

“We will compete like we do in hockey and elsewhere but in a very friendly manner,” Mamedov said. There’s no hardball in hockey, but that puck and those elbows sure are hard. 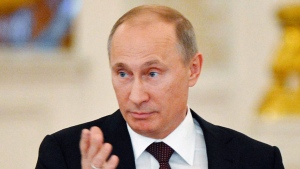 Robert Volterra calls the competition in the Arctic the 21st century’s “Great Game” — a reference to the Russian and British Empires’ 19th century struggle for control of Central Asia.

“My experience tells me that Russia and Canada are sparring with each other,” says the London-based Canadian lawyer who specializes in public international law. Volterra has represented and advised many countries in their dealings with the CLCS, the UN body that adjudicates claims to extend the traditional 200-mile offshore boundary for a nation’s economic exclusivity.

His professional gut also tells him that successful claimants in boundary disputes plan carefully and well ahead.

“It may well be that Canada’s claim to the North Pole is part of a comprehensive, considered, deep-think strategy about Canada’s Arctic future. I hope that it is,” said Volterra.

Foreign Minister John Baird, who speaks for the government on this topic, kept saying last week that Ottawa wants to “get this important submission right.”

Baird also made sure to point out that when it comes to Arctic sovereignty, politicians are making the decisions, not the guys in lab coats.

“We have asked our officials and scientists to do additional and necessary work,” said Baird. Translation: chop-chop scientists! We’re not backing off from the Russians. We want the North Pole, too.

Central to their marching orders is a detailed map of the Lomonosov Ridge, an undersea mountain range that stretches from Canada’s Ellesmere Island to the East Siberian Shelf.

That’s going to take awhile but it’s worth noting at this point that there’s a good chance the CLCS won’t even get around to looking at Canada’s submission for another decade. So there’s plenty of time.

In the meantime, as many government officials have said with the repetitiveness that only a widely-circulated talking points memo can muster:

“The government’s objective has been to obtain the most expansive continental shelf for Canada.”

He also went on to add that, “Canada is a big country and it has a big shelf.”

Well, Russia is a big country, too.

So, in the meantime, Santa should just get out of the way. With Canada and Russia jostling in front of the North Goal, the old feller might catch an elbow to the face. And who knows what kind of an international incident that might ignite?