This story is Part 1 of 3 on the stolen laptop files. Part 2 is scheduled for Tuesday and Part 3 will publish next week.

The number of people whose personal health information was put at risk after a laptop was stolen last year is much higher than the Northwest Territories (central Arctic) government initially reported, and the data breach affects people from every province and territory in Canada, according to internal documents obtained by CBC News.

Last May, a laptop belonging to an employee with the territory’s Department of Health and Social Services was stolen from a locked vehicle during a business trip in Ottawa. The laptop — used to do statistical analysis — was unencrypted but had a strong password, the Health Department said in announcing the breach last summer.

It contained health data for a majority of N.W.T. residents.

The N.W.T. government, which has a long history of health data breaches, has been silent about the stolen laptop since the public announcement in late June — more than six weeks after the theft. One other health data breach has happened since.

A health department spokesperson declined CBC’s request for an interview.

But documents reveal key updates and unreported details about the privacy breach.

I cannot with absolute certainty rule in or out the complete list of files absolutely on or not on the [laptop] at the time of the theft. Health department employee who lost the laptop

The information is contained in more than 350 pages of internal government emails and documents obtained by CBC through the Access to Information and Privacy Act. 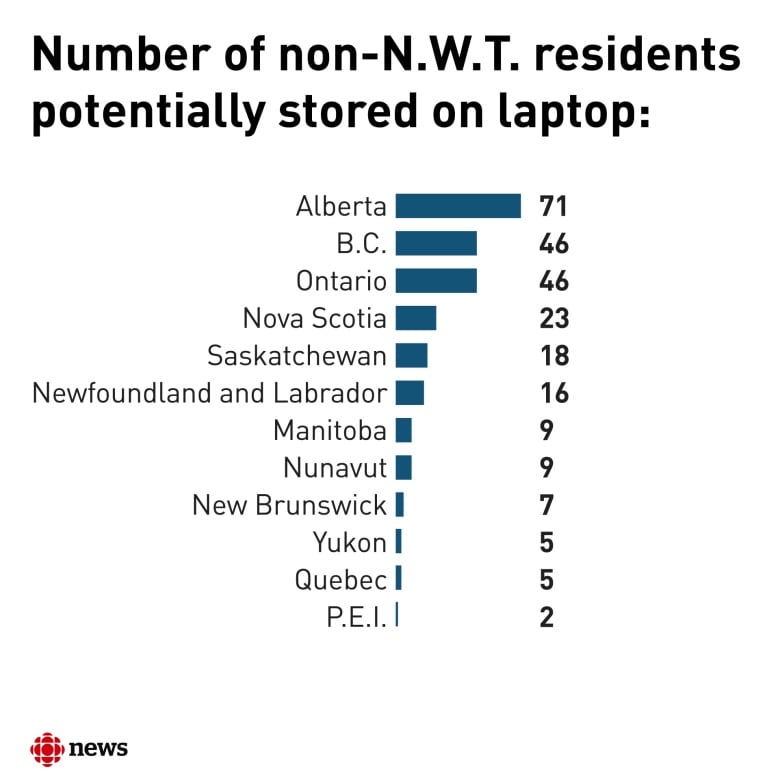 “We have no way to isolate what data was lost [or was] vulnerable to the breach or who were the subjects of the data,” the chief health privacy officer said in an email on June 19.

The department later relied on the employee’s memory of all potential datasets that may be on the laptop, to do their analysis.

Here’s what the documents further reveal:

50% of residents at risk of identity theft

Less than a week after alerting the public in late June, the Health Department found that 39,145 N.W.T. residents could be affected by the breach — up from the 33,661 figure that was publicly reported. Counting non-residents and unidentified individuals, the total number of people potentially affected exceeds 40,000.

The increase was due to finding information that was previously missed, the department said in the documents.

The department also said that upon further analysis, the risk of identity theft “significantly decreased.”

About 47 per cent of N.W.T. residents whose information was contained in the datasets are at “no risk” of identity theft, according to the documents, as they were just identified by health-card numbers.

But the remaining 53 per cent could be at risk of because their names, dates of birth and/or health-card numbers were stored on the laptop.

The documents also reveal that information about specific diseases, tests and vaccinations was potentially stored on the laptop. More than 50 per cent of all the records for N.W.T residents were in a tuberculosis surveillance dataset. With duplicates removed, the second highest number of records were for flu vaccinations.

Other information potentially on the laptop included: ethnicity, X-ray results, history of sexual partners, dates of death and “risk status.”

The internal documents say the tuberculosis blood test data was definitely on the laptop, while other data are categorized as “very likely” or “likely” to be on the laptop. 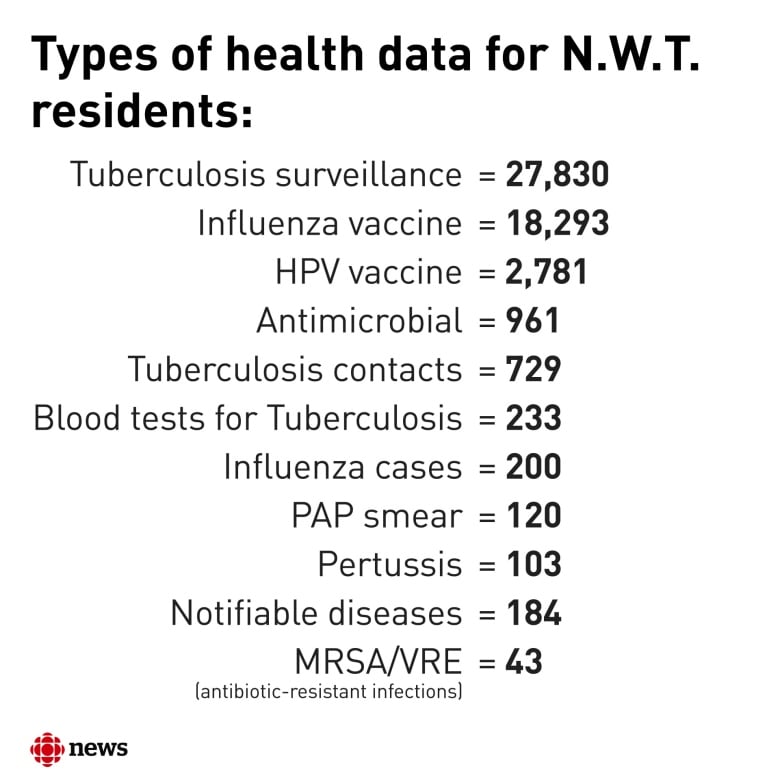 Data source with 100% of residents’ info

In their initial report to the department, the employee who lost the laptop listed the names of the sources, or information systems, used to extract datasets that “may have still been stored” on the laptop.

Among the systems listed is the Health Management Information System (HMIS), “which includes demographic information on 100 per cent of N.W.T. residents,” according to the documents. The documents note that HMIS is regularly updated and is “the most up-to-date source” for residents’ names, dates of birth, communities of residence, sex, health-card numbers and “other important indicators.”

It’s unclear whether HMIS was on the laptop, as the employee suggested they “rarely” worked with the system.

At the end of their report, the employee reiterated: “I cannot with absolute certainty rule in or out the complete list of files absolutely on or not on the [laptop] at the time of the theft.” 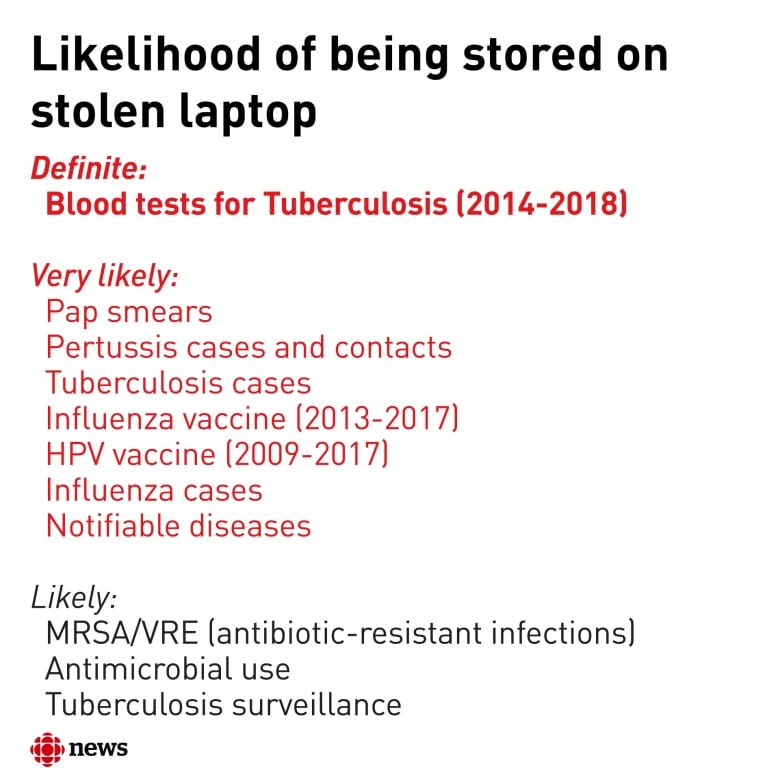 Info on Canadians from coast to coast

These people could have been visitors to the N.W.T., short-term workers or residents who recently moved, according to the Health Department.

Here’s the full breakdown by jurisdiction:

The documents also note there are 634 records with errors or that are missing identifiers.

Ottawa police did not formally investigate the theft, according to internal emails, as there was no video footage available from the area where the car was parked.

“Apparently the City of Ottawa police department receives in excess of 100 theft reports weekly … in the ByWard Market region,” the employee said in one email.

They say a constable told them the laptop was “likely sold for a small sum” and was “likely wiped clean.”

“No investigation was assigned,” states an internal email. “With no leads, the case has been closed.”