In one of the coldest places in Canada, Steve Kokelj is searching for Arctic thaw. He’s driving the great Dempster Highway, 747 kilometres of gravel linking southern Canada to the Arctic.

“The large permafrost disturbances that we’re seeing now have really developed in the last one to two decades,” he says.

Kokelj is a permafrost scientist for the territorial government, and his job is to survey the alarming changes to the layers of ice and rock which underpin the North.

“Think of permafrost as sort of the glue that holds the northern landscape together.”

But as the Arctic warms three times as fast as anywhere else in the world, that permafrost — made up of leftover ice from the last glaciation, frozen for thousands of years — is degrading.

That’s glaringly obvious as he pulls over to point out a huge hole carved out of the Dempster highway embankment. Elevated moisture and warmth have caused the side of the road to collapse.

“As the ice-rich permafrost thaws, the ground settles proportional to how much ice there is in the ground,” Kokelj says.

In this case, that’s a lot.

Further along the highway, another road slump was dubbed “the million dollar hole” because so much gravel had to be poured in to shore it up.

The highway is drivable, but climate-related maintenance costs on the Dempster have more than tripled over a decade, to $5.1 million in 2016.

“It really highlights the need to start thinking innovatively about the solutions, because these types of phenomena are going to become more and more commonplace,” Kokelj says.

There’s a saying among climate scientists that “what happens in the North doesn’t stay in the North,” meaning big changes in this region will affect the rest of Canada as well.

Mean temperatures in the Western Arctic have increased a staggering 3.4 degrees Celsius since the 1960s.

To put that in perspective, the goal of the Paris Agreement on climate change that Canada signed is to ensure global temperatures rise no more than an average of 2 degrees Celsius above pre-industrial levels. Scientists predict that worldwide warming greater than that could trigger potentially disastrous changes to weather patterns and ocean levels.

As the climate in the North has gotten warmer it has also become wetter, says Professor Chris Burn as he motors out along the MacKenzie River delta, pointing to long fingers of stripped vegetation on the adjacent Caribou Hills.

Burn has traveled to Inuvik, NWT (western Arctic), for 36 summers as part of his research for Carleton University and the Aurora Research Institute (ARI), a new and growing hub of permafrost research in Inuvik for Canadian and global scientists.

After a warm, wet summer two years ago, the tops of many of these hills gave way. There were 87 landslides in one night, a phenomenon that scientists had never before seen in the NWT. No one was hurt in this remote area, but “we have no basis to believe that this will not continue; it won’t stop now,” Burn warns.

The NWT government received $800,000 this spring in The Northern Transportation Adaptation Initiative to conduct permafrost testing along the Dempster and Inuvik to Tuktoyaktuk highways.

“We have to figure out what we’re going to do in the future. Because otherwise, when we make an investment in a building [or road] which is meant to last 50 years, if in 15 years it’s no good we’ve wasted a huge amount of resources.”

‘We’ve got no time to waste’

The town of Inuvik is already adapting.

Pilings under some new houses have been bolstered with supports that can be adjusted to compensate for shifting ground. Under other structures, a cooling system insulates the pilings to maintain the permafrost during warmer periods — bizarre in what has historically been one of the coldest places in Canada.

But in Tuktoyaktuk farther to the North, the coastline has eroded so much that a row of houses is threatened. And the graveyard in Tuktoyaktuk, located on a point jutting into the Beaufort Sea, is in danger of slipping into the ocean.

Sandy Adam’s place, originally built well back from the shoreline, now sits precariously 2 meters from the sea. He’s already lost his front yard and during “angry storms” the waves lick at his windows.

“I fear my house can fall into the ocean. Here it’s happening really fast, we’ve got no time to waste,” he says.

Engineers have marked his house for an emergency relocation, but that was a year ago.

Five other homes have already been moved inland.

“I’m used to living at the point. Cooler air comes from the ocean. You don’t get as many bugs as inland. It’s better out here,” Adam says.

“I guess they’ve got to move me where I don’t want to go. But it can’t be helped.”

Coastal erosion due to climate change could cost the hamlet of Tuktoyaktuk up to $50 million, according to Mayor Merven Gruben.

But that pales in comparison to the investment that will be required as the permafrost changes under roads and buildings.

“The whole circumpolar North is sitting on permafrost, so I don’t know what you can do. You can’t insulate the whole North,” says Gruben. 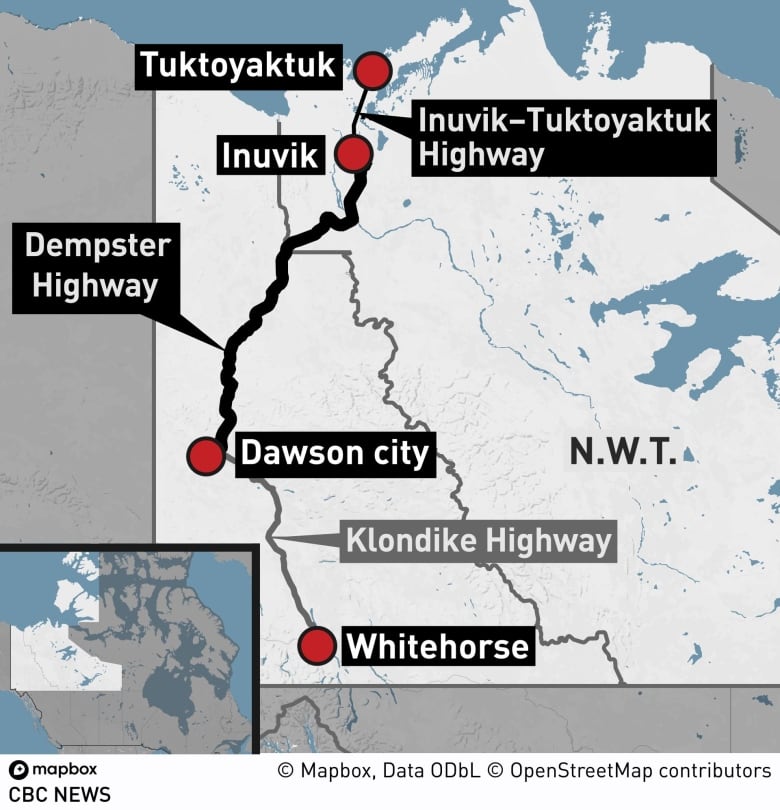 Just ask Joe Lavoie, a parishioner and volunteer fix-it man at the Igloo church in Inuvik, formally known as Our Lady of Victory church.

It was built in the late 1950s, and today it’s the most photographed building in town for its beauty and iconic shape.

But the sanctuary floor now slopes three to four inches towards the middle, says Lavoie. He opens a trap door to the basement to show why.

The dozens of pilings supporting the church are barely doing their job. Shifting ground caused by thawing permafrost has created gaps under some of the posts where they don’t meet the ground. There’s a patchwork of wooden wedges propped under others.

“We’ve blocked and reblocked several times,” says Lavoie, including the day after a funeral when 200 people were in the sanctuary.

“The floor was shimmying and shaking pretty bad, and so after the service we came down here and about 50 per cent of these posts were down.

“I’ve been here for over 30 years and never seen a problem until the last five years.”

“I meet a lot of people in the South, they know where Tuk is,” mayor Gruben says, “but they don’t believe this global warming thing’s actually happening.

“You know when you live it, breathe it, you see it every day, it’s amazing the changes in a few years.”

Climate change is eroding the coastline in Tuktoyaktuk, forcing the Arctic community to move homes before they collapse into the ocean. pic.twitter.com/JDw6s6hTQB

But some people are beginning to understand the scope of what’s happening in the North. A recent Senate report identified “northern infrastructure” as an urgent priority.

Earlier this month the Minister of Environment and Climate Change, Catherine McKenna, visited Inuvik and Tuktoyaktuk to support an Inuit-launched climate plan.

“We’ve started, we’ve already made investments and continue to make investments … but we are going to have to rethink how we build things, and how do we build resilient infrastructure, not just in the Arctic but in other places in Canada,” she said.

And on Monday, the House of Commons declared a national climate emergency — although a resolution of the House is a non-binding declaration and doesn’t require that any action be taken.

In Tuktoyaktuk, the Mayor is losing patience. “We’ve been studied to death, we’re doing what we can,” says Gruben.

“We’re the proverbial canary in the coal mine and I always said that canary died a long time ago. We’re just trying to survive, just keep things going.”

This story is part of a CBC News series entitled In Our Backyard, which looks at the effects climate change is having in Canada, from extreme weather events to how it’s reshaping our economy.

Norway: Temperatures on Svalbard have been above normal for 100 straight months, The Independent Barents Observer

Russia: Warmest winter ever on the Northern Sea Route, The Independent Barents Observer

United States: Sea levels could rise by up to 2 metres by 2100, new study finds, CBC News