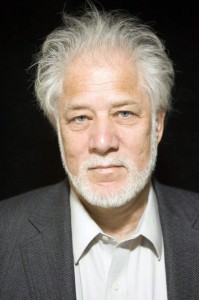 Born in Sri Lanka in 1943, Michael Ondaatje immigrated to England in 1952. He followed his brother to Canada in 1962, and received his B.A. from the University of Toronto in 1965, and his M.A. from Queen’s University in 1967. He has taught at a variety of institutions, including the University of Western Ontario, York University,
His best known work is probably the Booker Prize-winning novel The English Patient (1992), which was adapted into an Academy Award-winning film. He started with poetry in 1967 publishing Dainty Monsters and his first novel Coming Through Slaughter published in 1976. He has published numerous novels and poetry collections since then.
Ondaatje has also done short movies, plays and photography. He is also an editor, and has read, influenced and shaped numerous Canadian authors.
Audio: Q Interview with Michael Ondaatje