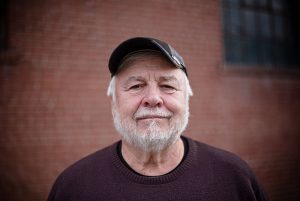 Credited with making a film that was a “turning point” in Canada, Don Shebib’s 1970 gem, ‘Goin Down the Road’, was shot on a shoestring budget with a crew of three and some unknown Canadian talent at the time.  But the resulting film, in spite of its flaws, is credited with igniting the Canadian movie business.

Don Shebib co-wrote the screenplay for ‘Goin Down the Road’ a story about two buddies, Pete and Joey, from Cape Breton, Nova Scotia, who are heading to the big city of Toronto in search of better lives.  It’s often described as an example of “the Canadian dream gone bad”.

Don Shebib is the grandson of Lebanese immigrants.  His father was born in Sydney, Nova Scotia in 1910.  His mother was an Irish Newfoundlander.  In a 2011 interview with Andrea Nemetz in Halifax’s Chronicle Herald, Shebib said, “I was aware of migratory experiences – like the Okies in California in the dust bowl.  I had a cousin who came to stay with us in Toronto in the late 1950’s and he tried to make a go of it and couldn’t and went back to the Maritimes.”

Almost 40 years later, Shebib finally consented to write a follow-up film, about the chararcters and what became of them. ‘Down the Road Again’ starts with Joey’s death, and Pete’s mission to dispose of his ashes.  The production reunited most of the cast, who went on to solid careers in Canadian TV, film and theatre.

Doug McGrath who played Pete, said, in the same interview in the Chronicle Herald, “he thinks ‘Goin Down the Road’ struck a chord in part because the story of having to leave to find work was familiar to so many.”

An accomplished documentary filmmaker when he made the first film, Don Shebib has always had a love-hate relationship with his early success.  But the film has now become a Canadian classic, and with the second film, Don Shebib appears to have made peace with his legacy.