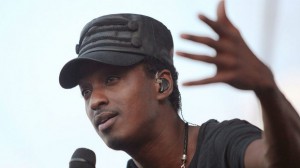 The man behind the global hit ‘Wavin Flag’, the song that was Coca Cola’s choice for the anthem of the 2010 FIFA World Cup, performed the song live in 86 countries around the world during the sponsor’s FIFA World Cup Trophy Tour.

The year before, K’Naan performed in a free live show during the ‘Arabesque: Arts of the Arab World‘ festival, at the John F. Kennedy Center for the Performing Arts in Washington, D.C. The three-week event brought 800 Arab artists together in the largest event of its kind.  K’Naan attracted many fans the opening weekend with his message of reframing the limited perception of Arab cultures in North America

In the fall of 2012, K’Naan released ‘‘When I Get Older: The Story Behind Wavin’ Flag“, a children’s book.  “I wanted to write a children’s story that reflects the new immigrant’s sense of family and identity, which can sometimes be lost in translation. In this book, the main character is Wavin’ Flag, a song whose ownership has been long claimed by children all over the world.” said K’Naan at the time.

Born in Somalia, K’naan’s family left the country, arriving first in New York City, and then moving to Toronto in order to escape the outbreak of the Somali Civil War in 1991.