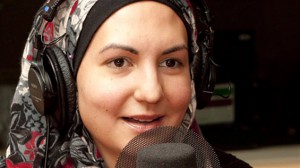 Oussayma Canbarieh Is a young Arab Muslim woman living in Montreal.  Her parents, originally from Syria, had been in the United Arab Emirates for a few years before immigrating to Canada and settling in Montreal.

Oussayma was seven when the family arrived and she began elementary school here.  Fluently trilingual, Oussayma speaks Spanish as well as French, she has been in and out of jobs in Montreal media.  Currently working as a freelance reporter, she is planning on pursuing a Master’s degree in the fall.

Oussayma Canbarieh joined me to talk about life in the mainly French-speaking province of Quebec, and her take on some of the divisive issues that have rocked Quebec society over the last ten years.

Because Quebec is the only officially French-speaking province in Canada, it is very vigilant about language and identity issues.  The initiation of laws protecting and promoting the French language back in the 1970’s caused a major exodus of Anglo-phone Quebecers to other places in Canada.  Over the ensuing years, all new immigrants had to enroll their children in French public education, and all services in shops and restaurants are carefully monitored to ensure the French language is used.

In the new millennium, faced with increasing immigration from countries with differing religious practices and customs, the province felt the need to clarify expectations.  The niqab, though rarely seen in Montreal, has been the source of a recent flurry of debate.  Prime Minister Harper stated that women should not be covering their faces in a niqab during Citizenship Ceremonies.  The leader of the opposition, Justin Trudeau, disagreed, and the media have followed the back and forth on the issue avidly since.

In 2007 the province of Quebec was dealing with the “reasonable accommodation debate”.  Hearings were established, to let people of various backgrounds express their views.  The process culminated in the Bouchard-Taylor Report, released in 2008 it made several recommendations that are still being discussed and reviewed in Quebec, and to some extent, in the rest of Canada