Weather: -4 degrees with snow, rain, cloud… you name it…

Nuuk, Greenland – Well, we’ve been in town less than 24 hours but I’ve already learned one very important thing about the people of Nuuk. And that is that besides New Yorkers, there’s probably no other people on earth as obsessed with talking about real estate… or rather the lack of it.

In fact, once people found out I was a journalist, that’s ALL they wanted to talk about. More than climate change, more than Inuit identity, and surprisingly, even more than Greenland Home Rule and eventual independence from Denmark.

No, the people of Nuuk wanted me to know their rents were outrageous, the wait for housing astronomical and above all, they were mad as hell about it.

In short, young people from all over Greenland are flocking to Nuuk for the job educational opportunities they can’t find in Greenland’s smaller communities.

But the problem is, the municipality of Nuuk can’t keep up with numbers of people that are arriving here. I spoke with a young father today who said he was able to get his name on a waiting list for an apartment but that it had a whopping 15-year waiting list.

But even if you ARE lucky enough for your number to come up, the problem’s only half solved, he said. A small, one-bedroom apartment can cost the equivalent of $1700 Canadian dollars a month, way beyond his salary that’s the equivalent of about $30,000 Canadian a year.

Other young people here told me they’ve given up hope of ever buying a small condo, let alone a house. With such huge rents and the high cost of living in the North, putting away money for a downpayment is almost impossible, they said.

But the problem isn’t just scarcity of housing. It’s the lack of land to build on. Nuuk is surrounded by jagged hills of rock, snow and ice. The municipality is literally running out of land. There’s nowhere left to build but up. And even that’s not going fast enough to keep up with demand.

And so the housing crisis continues. 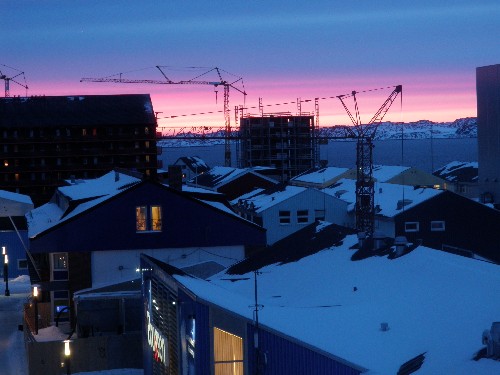