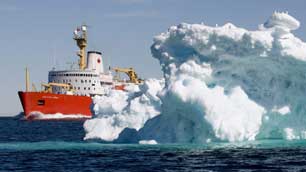 The Canadian Coast Guard icebreaker Louis S. St-Laurent travels in Lancaster Sound as part of a sovereignty and research patrol through Canada’s Arctic in July 2008. (Jonathan Hayward/Canadian Press) A federal government proposal to conduct seismic tests for oil and gas resources in Lancaster Sound, Nunavut, could support other government plans to create a marine conservation area there, according to the tests’ proponents.

The Geological Survey of Canada wants to conduct seismic testing for potential oil and gas resources this summer in the Lancaster Sound area, located at the eastern entrance to the Northwest Passage, as part of its proposed Eastern Canadian Arctic Seismic Experiment.

The Nunavut Impact Review Board is screening the proposal, and accepted public feedback until the end of last month. The board is expected to complete the screening process by the end of this week.

News of the proposal has raised concerns in Nunavut, where some noted a contradiction between the proposed oil and gas tests and the federal government’s proposal to create a national marine conservation area in Lancaster Sound.

Natural Resources Canada, which oversees the Geological Survey of Canada, downplayed suggestions about a contradiction in an email to CBC News, explaining that a Mineral and Energy Resource Assessment (MERA) is part of the government’s feasibility study on whether to create a marine conservation area.

To that end, the seismic tests they are proposing could contribute to and even accelerate the MERA process, according to the department.

In a letter to the Nunavut Impact Review Board, Parks Canada acknowledges that the proposed seismic testing “may provide valuable information to assist Parks Canada and other agencies in identifying the requirements for a non-renewable resources assessment.”

However, Parks Canada says the seismic tests are currently not part of the MERA process for determining whether to create a national marine conservation area in Lancaster Sound.

“To date, the scope and scale of the information required on mineral and energy resources for the feasibility study for a proposed NMCA [National Marine Conservation Area] has not been determined,” says the agency’s letter, dated April 27.

Neither Parks Canada nor Natural Resources Canada was available for further comment.

Regardless of the perceived value of the proposed seismic testing towards creating a marine conservation area, if the end goal of the tests is to find oil and gas resources in Lancaster Sound, Inuit say they are concerned about the potential of oil spills and other environmental impacts.

“We want the government of Canada to understand very clearly that even if they find a lot of oil down there, you know, the wildlife has to have priority over that,” said John Amagoalik, director of lands and resources with the Qikiqtani Inuit Association.

“We want to make sure that the national marine conservation area is put in place so we can prevent oil drilling in the sound, because the communities are extremely worried about what might happen.”

The Nunavut Impact Review Board has invited Natural Resources Canada to respond to community concerns about seismic testing.