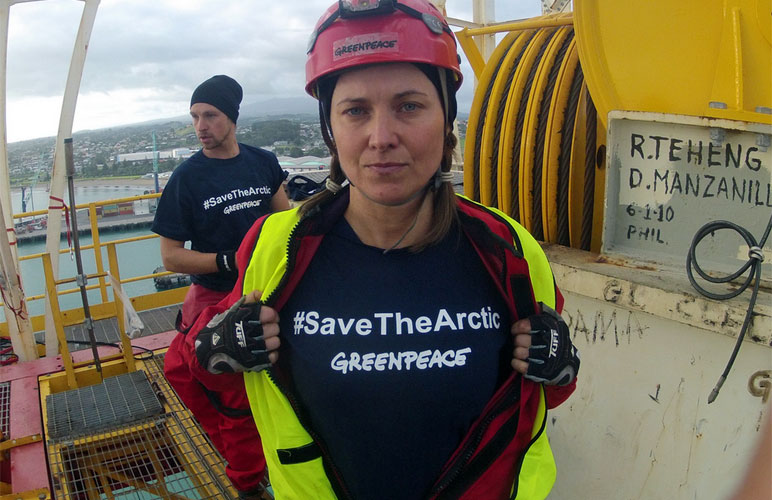 Lucy Lawless, the actress who played the sexy, swashbuckling heroine of the cult classic named for her character, “Xena,” scaled the derrick of an Alaska-bound drillship Thursday with Greenpeace activists to protest exploratory oil drilling she believes could “devastate” the fragile Arctic environment and accelerate global warming, according to a statement from the pro-environment organization.

The Noble Discoverer ship, contracted by Shell to drill up to three exploratory wells this summer, was leaving Auckland, New Zealand, bound for Chukchi Sea waters off Alaska, according to the release.

“I’m blocking Shell’s Arctic drillship because I believe passionately that renewable energy is the way of the future,” Lucy said from the ship, according to the release.

Shell spokeswoman Kelly op de Weegh said the company respects freedom of speech, but isn’t pleased with Greenpeace’s tactics. The company is in contact with local authorities to keep the ship on path toward Alaska, she said.

“We are disappointed that Greenpeace has chosen this method to protest,” she said. “Actions such as this jeopardize the safety of everyone involved. While we respect the right of individuals to express their point of view, the priority should be the safety of Noble’s personnel and that of the protestors.

Six Greenpeace activists, as well as Lawless, a 43-year-old mother of three now co-starring in the TV show “Spartacus,” blocked the ship from the leaving the port of Taranaki for its 6,000-mile trip, the release said. The dill-rig invaders apparently expect to stay a while: the release notes they have several days of supplies.

Op de Weegh confirmed that the Noble Discoverer is currently at port in New Zealand, and said the port had been closed.

“Personnel from Noble have been in touch with local authorities,” she said, in response to an emailed question about how the company would respond to the boarding.

Shell says it has safely drilled exploratory wells off Alaska’s coasts before, in the 1980s, and that it found oil and gas but never developed because global prices bottomed out and Arctic drilling became cost-prohibitive. Shell invested $2 billion to obtain leases in the Chukchi Sea in 2007.

With high prices in recent years, Shell is back and hopes to begin drilling exploratory wells in the Beaufort and Chukchi seas in U.S. waters this summer. The Hague-based oil conglomerate says it will exceed U.S. environmental safety requirements in its Arctic drilling efforts, and plans to employ sophisticated technology to reduce air emissions and a specially built capping and containment system to prevent an oil spill.

Greenpeace warns that a successful strike by Shell will launch a polar oil rush, threatening the relatively pristine Arctic. Environmentalists have warned that no technology exists to clean oil from the region’s thick sea ice.

“We don’t have to go to the ends of the Earth to suck out every last drop of oil. Instead we need to smarten up and begin the transition to a clean, green, sustainable energy future and right now that means keeping Shell out of the Arctic.”

Shell has recently been steaming ahead in its efforts to win regulatory approval to drill this summer in the Arctic seas, recently receiving an air permit for the Noble Discoverer and related ships. Environmental groups said Tuesday they’re challenging the permit in court.