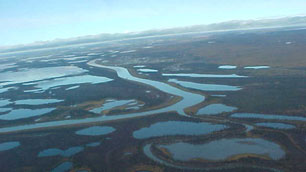 Ottawa and the Northwest Territories have fully accepted only 10 of the 115 recommendations made by an environmental panel about the proposed Mackenzie Valley pipeline.

The Joint Review Panel made a total of 176 recommendations to mitigate any harmful environmental and socio-economic effects of building and operating a 1,200-kilometre natural gas pipeline. Of those recommendations, 115 were aimed at the federal and N.W.T. governments.

When it released its findings in December, the panel said it would support the proposed pipeline — which would run from gas fields in the Beaufort Delta, through the Northwest Territories south to a hub in northern Alberta — only if all of its recommendations are implemented.

The governments did not identify which recommendations were accepted, rejected or needed modification. But their response did point to general concerns:

The federal and N.W.T. governments did not respond to the Joint Review Panel’s 61 remaining recommendations, which were directed to the National Energy Board and the Alberta government.

The National Energy Board, a federal agency that regulates parts of Canada’s energy sector, is determining whether to approve the pipeline proposal. The board’s decision is expected in September.

N.W.T. Environment Minister Michael Miltenberger said the details of the governments’ interim response have been sent to the territory’s aboriginal governments for their input.

“We’re in a situation where that information is going to take place between the aboriginal governments and ourselves and the federal government,” Miltenberger told CBC News on Monday.

“When that is all finished, then the information will be pulled back together. And then at some point, closer to the fall, there will be a final report that is done and presented.”

The federally appointed, independent Joint Review Panel was set up by the federal environment minister in 2004 as an advisory group and spent about five years studying the issue, including holding hearings.ref=rss#ixzz0oI2WvQUG