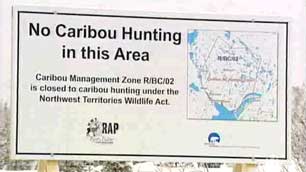 Canada’s Northwest Territories provincial government has withdrawn its request to get a court opinion on whether its authority to regulate caribou hunting trumps the hunting rights of aboriginal groups.

The N.W.T. Supreme Court was asked in February to clarify whether the territorial government has the authority to ban aboriginal subsistence hunting in the Bathurst caribou herd’s winter range, which extends north of Great Slave Lake to the N.W.T.-Nunavut border.

The court was also asked to confirm whether the government’s authority to regulate caribou hunting supersedes the hunting rights of Dene and other aboriginal groups.

The decision to ask the court to clarify the issue came after Dene leaders — and even some MLAs — questioned the legality of the hunting ban, which has been in place since Jan. 1.

‘Let’s decide this for ourselves’: premier

But on Wednesday, the government announced it is withdrawing the case because some aboriginal leaders have said it would be “unnecessarily divisive.”

Premier Floyd Roland said the territory’s political leaders will instead work out the issue of when and how of hunting bans will be imposed.

“The courts are always there and will be there and can be used from time to time,” Roland told CBC News on Wednesday.

The Dene’s national chief, Bill Erasmus, agreed that it’s better to negotiate a solution than it is to seek one through the courts.

“Part of it is to develop a place in the North that we’re all comfortable with, something that makes sense to all of us, and the only way you can do that is by talking it out.”

Some aboriginal groups that have been affected by the hunting ban say they are unhappy that the court case is being withdrawn.

Lawyers for the Yellowknives Dene First Nation said the N.W.T. government is simply trying to avoid having to prove that it has met the strict conditions required to interfere with aboriginal hunting rights.

The North Slave Métis Alliance had also wanted the government’s case to proceed since it cannot afford to pursue the issue in court on its own.

“We would have liked to hear an answer from the court on this question, on somebody else’s tab,” said Sheryl Grieve, the alliance’s environment director.

Grieve said the North Slave Métis were never consulted about the caribou hunting ban, though their hunting rights are also constitutionally protected.

But Erasmus said the government’s court case would not have dealt with all the issues aboriginal leaders had about the hunting ban.

“When we heard they were going to put a question forward, we were prepared to talk to them about what the question ought to be so that it, in fact, addressed the concerns that everyone has,” Erasmus said.

“That didn’t happen; they drafted it themselves. So, we didn’t think that it really would have answered all of the questions that are before us.”

Roland said returning discussions about the caribou hunting ban to the political realm will be a test of how effectively regional leaders can work together.

The caribou hunting ban will continue to be enforced in the meantime, Roland said.