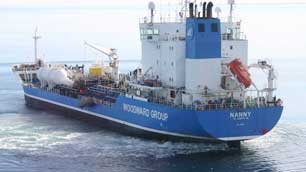 A fuel tanker stuck in the Northwest Passage will be joined later this week by a second tanker that will help siphon some of the 9.5 million litres of diesel on board.

The Merchant Vessel Nanny ran aground Sept. 1 on a sandbar about 50 kilometres southwest of Gjoa Haven, Nunavut, Canada in Simpson Strait within the Arctic passage.

The tanker, which is operated by Newfoundland, Canada-based Woodward’s Oil Ltd., was transporting annual diesel supplies to remote Nunavut communities when it became stuck on its way to Taloyoak.

No fuel has leaked from the vessel to date. The Canadian Coast Guard, which has a ship in the area to monitor the Nanny, says overhead flights have confirmed that no diesel has leaked.

Officials with the Nunavut provincial government, which contracted Woodward’s to ship the diesel supplies, said Tuesday that a plan remains in place to offload some of the fuel from the MV Nanny to lighten the vessel so it can float off the sandbar.

Todd McKay, the field operations manager with the Nunavut government’s petroleum products division, told CBC News that a Transport Canada official visited the MV Nanny over the weekend and verified the company’s claims about the condition of the vessel and the fuel on board.

That plan relies on a second Woodward’s fuel tanker, the MV Tuvaq, which has departed Iqaluit and will go past the Nanny and travel another 370 kilometres to the community of Cambridge Bay by Thursday morning, McKay said.

The Tuvaq will deliver about seven million litres of diesel in Cambridge Bay then double back to the Nanny to take on some of its fuel cargo, which McKay said will begin sometime between Saturday and Monday.

Officials estimate that about 2.5 million to three million litres of diesel must be drawn out of the tanker to make it float. McKay said they will pump out five million litres from the Nanny.

Both the Nanny and the Tuvaq will then continue delivering diesel to the western Nunavut communities of Taloyoak — the Nanny’s intended destination — and Kugluktuk, although that plan could change.

In light of the incident involving the MV Nanny, some Arctic shippers have said much of the Northwest Passage remains poorly charted for marine traffic, although routes in and out of communities along the waterway are regularly travelled.

But the sand and mud shoal that the MV Nanny ran aground in last week has actually been known about for more than a decade, according to the Canadian Hydrographic Service.

“We did note that there was a shoal in that approximate area of the grounding, and a notice to mariners was actually issued to warn mariners of that hazard,” said Dale Nicholson, the hydrographic service’s director.

Nicholson said that notice was published in 1998. Shipping companies are responsible for updating their own charts with the latest notices, he added.