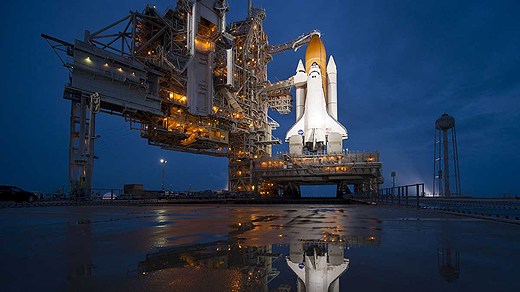 And with that, human beings moved another step closer to something that some have dreamed about for years — commercial space flight. Sweden wants in on the action, and one Swede in particular.

Since 2007, a consortium has been working on a major project that would make Kiruna, the northernmost city in Sweden, Europe’s first place for space tourism. It’s called Spaceport Sweden.

Dan Björk is the marketing and sales director at the Ice Hotel near Kiruna. The hotel is a partner and part owner in Spaceport Sweden. And although the project is still a long way off, he will not say how long, marketer that he is, he is of course very optimistic that at some point in the future, commercial space flights will be operating from Kiruna.

But he also acknowledges the doubters. “I mean we’re talking pioneer entrepreneurship and there’s skepticism for sure but I don’t think anyone will be skeptical when the first clients are coming here,” he says.

And if he is right, then Renata Chlumska, a well-known adventure athlete who was the first Swedish woman to reach the top of Mt. Everest, may be the first one to do it in Sweden.

But Sweden’s Spaceport is not yet ready for her, so instead she plans to be the first Swedish woman to go into outer space with Virgin Galactic at Spaceport America in New Mexico.

She says she was introduced to a travel agency that had connections to Virgin Galactic a few years ago. “Of course I was one of the first Swedes to sign on,” she says. “I really believe in this. Fifty years back there were just a few people who were privileged enough to fly around the world, and now flying has become something general. So even if today space travel feels exclusive and very futuristic, it is within reach. It’s happening now. The future is here and that’s so fascinating to be able to be apart of that.”

She said she always asked herself what the next ultimate challenge would be. And now she has found it.

She has been told she will be travelling into space most likely within the next two years. “I see this as only my first flight and my goal is, in 15 to 20 years, to fly to the moon and climb the highest mountain there, and then I’ll be doing that from Sweden,” she says.

The launch facility in New Mexico is under construction and is expected to become fully operational later this year. Virgin Galactic says Kiruna is one of a number of locations around the world that may be considered for commercial spaceflight in the future.