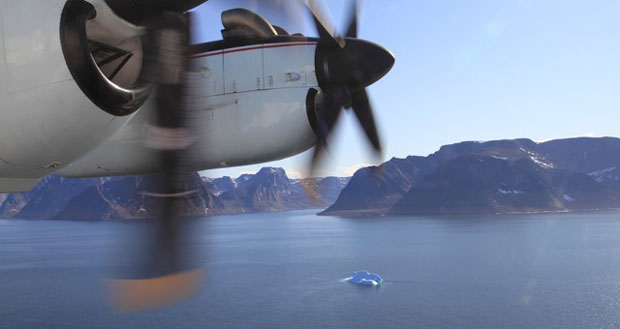 Ships sailing in Canada’s Arctic this summer are being watched by an aerial patrol to make sure vessels aren’t polluting the water with oil or other contaminants.

The patrol, which is part of the federal government’s National Aerial Surveillance Program, flies over Arctic waters every summer until late-October.

A four-member crew aboard a Dash 7 aircraft, outfitted with special equipment, flies over ships travelling in Arctic waterways, looking for signs of oil spills or other forms of marine pollution.

“We’re looking for oil in the vicinity or any type of pollution within the vicinity of a vessel, and anywhere in between as well,” Ken Derouin, one of the two observers aboard the plane, told CBC News.

On Tuesday, Derouin snapped photographs and recorded video as the Dash 7 plane flew over Hudson Strait, where fuel supply ships were travelling between communities in Nunavut.

Seven different vessels were spotted that day, and none of them showed signs of pollution. The only error the crew noticed was that one ship was steaming ahead, even though its official nautical status had said the vessel was anchored.

The aerial patrols are carried out under the federal Arctic Waters Pollution Prevention Act, which makes it illegal to dump liquid or solid waste in Arctic waters. Ships are required under the act to notify officials if there is an oil spill.

The legislation was passed more than 40 years ago. In 2008, the federal government announced that it would double the act’s coverage area to 200 nautical miles from the nearest Canadian shore.

No major spills have been found in Arctic waters so far this summer.

But the risk of marine pollution is bound to rise as Arctic waterways become ice-free in the coming years, making them more accessible to ships and development.

Derouin says the patrol plane currently checks on vessels a couple times a week on average.

While he said more frequent checks would be preferable, Derouin added that the patrol must scan the entire Arctic region with just one airplane.

The patrol plane, which is outfitted with cameras and other high-tech surveillance equipment, was recently used during the Gulf of Mexico oil spill last year.

“We did a great job and they really appreciated it, and it really proved to our government how well this system is and how useful it is,” said Craig Karpenic, the aircraft’s pilot.

Back in the Arctic, Derouin said one bonus of the summer patrol is that the crew has spotted a lot of northern wildlife, citing a recent sighting while flying to Iqaluit.

“One of our pilots did observe a reddish substance, both in the water and actually on a small iceberg … only to realize that it was two polar bears that had caught a seal and were helping themselves to their bounty on the iceberg,” he recalled.