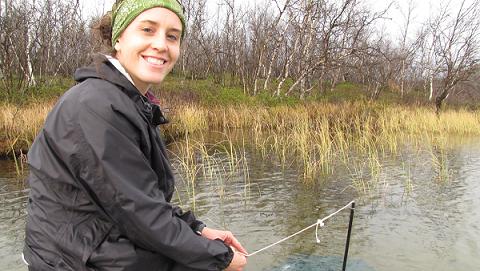 We are at a small lake in the ÿábrak lake system.

If we’d been here twelve years ago, we could have gotten Arctic char in the nets. Back then, when researchers came here for the first time, the char and the nine-spined stickleback were the only fish found in the lake.

When they took a group of students to the lake three years later to study the char, they found pike there as well.

Another four years later, researchers discovered that the pike had taken over completely.

“The char not only had to compete with the pike for the food they normally ate, but they were also getting eaten by the pike,” says Hein.

In the future, when annual mean temperatures rise, the water in the lakes will also get warmer and more hospitable to pike. Katie Hein and her colleagues at Umeå University have developed mathematical models, partly based on the Swedish Meteorological and Hydrological Institute’s climate scenarios and the university’s own database over fish populations, which can predict the spread of the pike to the mountain lakes.

“That is a pretty big change; we know that a lot more lakes will be suitable habitats for pike in the future, actually all of them should be warm enough,” says Hein.

Even if all lakes are warm enough for pike to survive in the future, the pike still have to get into the lakes. Katie Hein explains that their models take into account that the lakes have to be connected to other streams.

“If the slope is more than seven percent they won’t be able to swim up the stream,” she says.

Ol-Johan Sikku heads up the Sami branch of the ecology and food organization “Slow Food.”

He takes the information that the char is at risk of being outcompeted by the pike with considerable equanimity, saying that natural climate changes don’t worry him as much as environmental destruction and land exploitation.

“The climate has always changed. If Sami people whose livelihoods are dependent on nature are allowed to work in pace with nature, I don’t think there’s any great risk that things will change,” Sikku says.

“The real threat is all the exploitation,” Sikku continues. “They are faster, much more dangerous, and they poison the land.”
How are mines and wind turbines threatening Sami food culture?

Sikku, chairman of Slow Food Sápmi, says “When they take over our land, the foundation of our traditional food culture, there is no possibility at all of producing and living in our culture.”