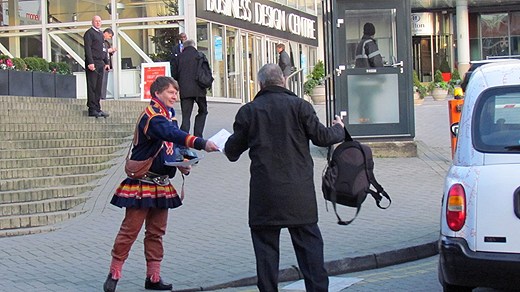 Representatives from six indigenous Saami villages in northern Sweden were forced away from an international mining conference in London, England this week when they protested against mining in reindeer herding areas.

The Mines and Money conference is a major international conference for mining companies and their financiers.

Increased international interest in mining in Sápmi, the Saami people’s traditional homeland, prompted several representatives from Saami villages in the Jokkmokk and Kiruna municipalities in Sweden’s Arctic to travel to London to protest.

The villages, in collaboration with the Saami Council, believe that mining is destroying reindeer pastures and they want the industry to take notice.
But when the conference began at the Business Design Centre, the Saami representatives were driven away from the event.

“We’re not really sure what’s going to happen, because they’ve already driven us away several times—farther and farther away from the conference centre each time,” says Carl-Johan Utsi from the Saami village of Sirges.

The guards have also attempted to forbid them from being on the street outside of the conference center. But the Saami representatives are cooperating with the London Mining Network, and Richard Solly from the network argued with the guards, noting that the area outside the conference centre is public property, and the public cannot be prohibited from occupying the space.

“Our presence is obviously bad publicity for the mining companies, so of course they’re trying to get rid of us by any means possible,” says Carl-Johan Utsi.

“I have to imagine that these people are taking their view of the world as the only correct view of the world,” Gebel said speaking of the Saami protests. “And they are disregarding the view of all the other people who want metals to increase their standard of living, who want to work in mines and gain a better life. We are not forcing anyone to work in a mining industry but our society need metals.”