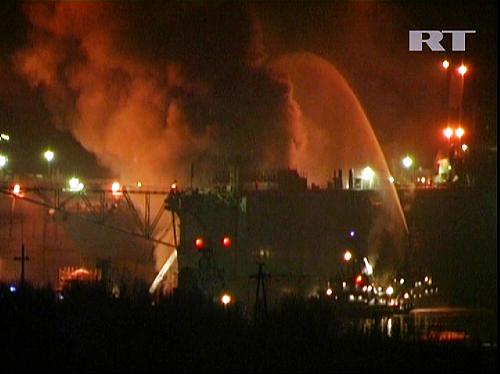 Just a couple of weeks ago, a Russian oil rig sank off the coast of Sakhalin Island, leaving at least 17 dead and 36 more missing. Only 14 people survived, and the search has been called off to ensure the safety of the rescuers in harsh conditions. Now, in the Arctic shipyard in the village of Roslyakovo, Murmansk in northwest Russia, the Yekaterinburg, a nuclear submarine,caught on fire last week while undergoing repairs. Welding that was occurring on the wooden scaffolds surrounding the vessel reportedly caused the fire. Eventually, the flames spread to the submarine.

Villages in Roslyakovo, rather than the Navy, noticed the fire and reported it to Russia’s Ministry of Emergency Situations. A video of the fire is available here, courtesy of RIA Novosti.

Helicopters were on-site trying to put out the fire. Six hours later, the submarine was submerged to try to stop the blaze for good. Minister of Emergency Situations Sergey Shoygu said that the fire had been mostly contained at 1:40 am, but that firefighters were still combatting small pockets of flames.

Nineteen crew members have been injured so far, either from burns or smoke inhalation, though the Russian authorities claim that no one was hurt. They also will not disclose how many crew members were onboard the submarine at the time of the fire. They have claimed that neither nuclear weapons nor the nuclear reactor were on the ship, as the sixteen ballistic missiles, along with torpedo tubes, had been removed prior to repairs. If this is true, the fire should not be radioactive. Since the fire reportedly only broke out on the submarine’s outer hull, there also should not be any major radiation risk, since the nuclear weapons and reactor would be farther inside. The Yekaterinburg normally carries R-29RMU Sineva intercontinental ballistic missiles.

Deputy Prime Minister Dmitry Rogozin sent Acting Head of Industry and Trade Denis Manturov to Murmansk. Meanwhile, the Investigative Committee of the Russian Federation has launched an inquiry into the fire, entitled, “Damage to property due to negligence of the military.”

It is hard to believe Russian authorities and federal investigations after the last few maritime disasters, notably the sinking of the nuclear submarine, the Kursk, in 2000. On top of that, and on top of the recent sinking of the Kolskaya oil rig, a Russian nuclear icebreaker, the Vaygach, caught on fire earlier in December, killing two. Again, there was reportedly no radiation released, since the fire occurred in the ship’s living quarters, far from the reactor. Still, in order for foreign investors to feel secure about investing in Russia’s maritime industries, whether they be icebreakers or offshore oil rigs, there needs to be more transparency. Russia also probably needs to enforce tighter regulations and upgrade its infrastructure. After all, you don’t hear about similar disasters in countries like Norway or Canada nearly as often. This blog post from the Voice of America’s Russia Watch on the sinking of the Kolskaya is highly informative and offers great insight into what happened, why, and the culture of negligence that persists in Russia from the top down.