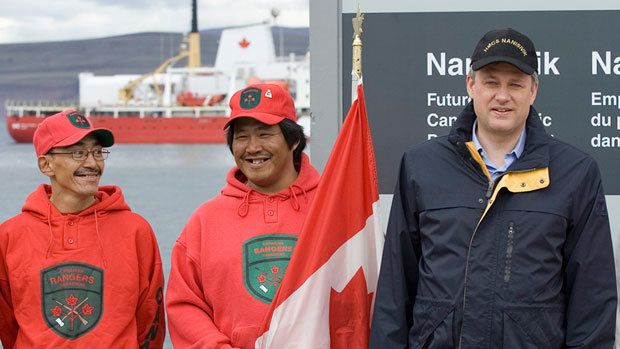 In August 2007, Prime Minister Stephen Harper announced plans to build a deep water port at Nanisivik, where remnants of an old port and airfield from the area’s nickel mining days would serve as the foundations for further construction.

New docking and refueling facilities were to be built, thus turning Nanisivik into an important site in the High North for the Canadian Forces. Two years’ worth of fuel could be stored and there would also an airport, a telecommunications network, offices, and living quarters.

The project was budgeted at CAD $100 million.

Looking back on project

Though nobody lives in this corner of Baffin Island, its strategic placement along the Northwest Passage and the preexisting infrastructure made the government choose to construct a deep water port in Nanisivik rather than in the territorial capital of Iqaluit.

Many had hoped this town of nearly 7,000 would receive a badly needed port, including Western Arctic Member of Parliament Dennis Bevington. Nunatsiaq News interviewed Bevington, who stated that a port in Iqaluit “would be vital infrastructure that could help the people of the Arctic reduce their costs and build a prosperous territory.”

I interviewed Bevington by phone for a story on Northern infrastructure that I wrote for the magazine ReNew Canada in December 2010, and he expressed a similar sentiment about the port. I asked whether increasing military presence in Northern Canada was best way of improving infrastructure, and he said:

“Well, I think in some ways, what we’ve seen so far is that the military investments are not really designed to assist the development of community infrastructure or much needed Northern infrastructure. They are stand-alone investments. The government did that when it announced a deep-sea port in Nunavut at Arctic Bay, when what is really called for in Nunavut is a better port for Iqaluit. If the military had put that port in Iqaluit, we would have gotten combined use that could have been very valuable. We can’t afford separate investments in military infrastructure in the North. We need to have these things work for multiple purposes.”

Yet now, due to the downsizing of plans for the Nansivik Naval Facility, even the soldiers who will one day pass through might not have anything to write home about. In a letter to the Nunavut Impact Review Board on February 24, the Department of National Defence (DND) explained that the facility will only serve as a refueling station in the summer, and on top of that, fuel capacity will be halved. There will also be no accommodations to speak of, for there will only be one, unheated building. The telecommunications network will go undeveloped, too. Employees working at Nanisivik will have to use walkie-talkies or cell phones instead. The airfield will no longer be modernized, as the DND will rely on the Arctic Bay Airport, 13 miles to the south. In 2010, this airport became the region’s primary one after the territorial government lengthened its runway.

In the House of Commons last week, Bevington spoke out against the government’s history of empty promises in the Arctic:

“Mr. Speaker, the Prime Minister’s promised Arctic naval base at Nanisivik has been downgraded to a fuel cache and an unheated shed.

In 2006, the Prime Minister promised to build a deepwater port at Iqaluit that could be used by the military. This would be vital infrastructure that could help the people of the Arctic reduce their costs and build a prosperous territory. Instead of photo ops and empty rhetoric, the government should have focused on getting the job done for northerners.

When is the government going to realize that the best way to protect the Arctic is by helping the people who call it home?”

The Honorable Julian Fantino, Associate Minister of National Defence, responded rather unconvincingly, “Mr. Speaker, Canada’s north is central to our government’s vision for Canada and the future. We continue to develop the Nanisivik station to serve as a docking and refuelling station for the Royal Canadian Navy and other government vessels operating in the north. Through our northern strategy, our government continues to increase Canada’s presence and sovereignty in the Arctic.”

The facility at Nanisivik, or what remains of it, is slated to open in 2016, three years behind the initial target of 2013. As of now, it should still be able to service the six to eight Arctic/Offshore Patrol Ships the government is still planning to obtain.

The irony of it all is that while Bevington decried the downsizing, nobody is really outraged that the facility might not be built. That’s because Northerners will not reap too many benefits from its construction; instead, the military stands to be the main beneficiary. Were Iqaluit to have been selected as the construction site for the deepwater port, local support would have been much stronger and it would have been much more politically difficult for the government to backtrack. Now, it’s unclear whether anything will be built at all, what with the delays and cutbacks.

On the bright side, perhaps this incident will cause the government to focus more on investing in infrastructure that will either help either the local economy in the North or have dual-use purposes for both civilians and the military. The high costs of construction and the short length of the construction season make these the only sensible things to do. A report by the Federation of Canadian Municipalities issued in 2010 entitled “On the Front Lines of Canada’s Northern Strategy” spells out in great detail what is necessary for bringing the North up to speed with the South. The report concludes, “Well-managed military investments and commitments coordinated with northern municipal leaders can re-enforce local aspirations and activities and quality of life for Canada’s northern communities; poorly planned and hastily undertaken, they can and do have severe and negative impacts on northern communities and residents.”

The Nordic countries are declared the “gold standard” when it comes to integrating military and civilian investments. One key example is in Norway, where the military headquarters were moved to Bodø in November 2010. This demonstrates the government’s strong commitment to the North, which has a positive impact on both strategy and people. For instance, the Bodø Main Air Station, Norway’s largest, permits both civilian and military usage, making the country’s High North more accessible to all.

The real question Harper should be asking himself is, if Canada doesn’t use the Arctic, is it going to lose it? Probably not, but the North could continue to fall farther and farther behind in terms of development compared to both Canada’s South and other Arctic regions in the world.