A cultural heritage survey carried out in Finnish Lapland last summer discovered dozens of previously unknown historic and prehistoric sites. The resulting site inventory is to be used to map out more areas for preservation, and to provide a guide to those seeking insights into the deep past in the far north.

The national parks, nature reserves and other protected areas of Finnish Lapland are almost always thought of as wilderness untouched by human hands. The truth is very different, as last summer’s survey showed.

At Kevo, in the very northernmost region of Finland, the handiwork of humankind can be seen almost everywhere. There are remains of habitation stretching from the Stone Age to historical times to be found in the river valley and on the highest of the fells.

There are stone-lined storage pits tunneled into the sides of hills and hundreds of pits dug into the sandy soil to trap deer.

The area of Kilpisjärvi in Finland’s northern “arm”, near the very northwestern-most point of the country, was inhabited as well as early as during the Stone Age.

Also of interest in the area are the extensive remains of the foundations and fireplaces of Iron Age and Medieval “kota” dwellings, the tipi-shaped huts associated with the indigenous Sami people of the North.

Many people visiting the area are sure to also be interested in the WWII gun emplacements, bunkers and traces of POW camps that are still to be seen there. 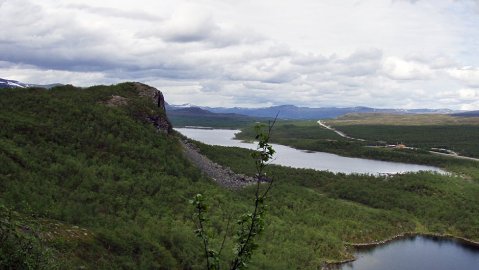 The Pallas-Yllästunturi National Park in western Lapland and the Pyhä-Luosto National Park in the east are best known for their magnificent landscape and beautiful natural features, making them popular destinations for hiking and tourism. Both also contain sites that were sacred to the Sami people of old, along with signs of more recent human activity.

Finland’s most southern fell chain runs through the Pyhä-Luosto National Park. Just to the south of these hills are wetlands that were once upon a time mown for cattle feed.

Stands of marsh grasses and the outlines of the foundations of old barns are silent witnesses to that period of the past. At Karhunjuomalampi, hikers can rest in a shelter and gaze upon the same scenery as did the ancients, as it sits amidst what was once a Stone Age dwelling site.

Wandering through the Pallas-Yllästunturi National Park, one can come across old border markings, long forgotten corrals that were used for annual reindeer round-ups and pit-traps dug by hunters of another age.

Last summer’s survey has added to the store of knowledge about the works of humankind in the far north. Metsähallitus, the state enterprise that administers state-owned land and water areas intends to use the inventory to map out more areas for preservation, and to designate more sites of interest to visitors.