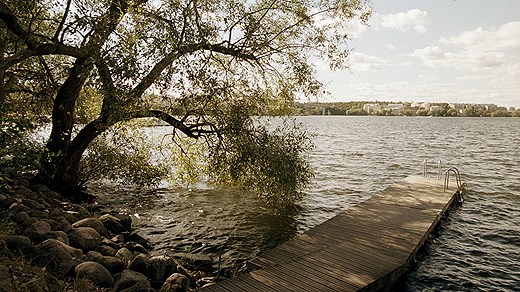 A Swedish suburb near Stockhom has taken the unprecedented step of stopping apartment building construction along the water’s edge after a climate and vulnerability analysis.

“It’s the first time we’ve taken this step, and given a clear ‘No’ to construction for this reason,” says Katarina Berggren, chairman Botkyrka’s municipal board.

The plan was to build 150 apartments on the shore of Albysjön, a small inlet connected by a narrow channel to Lake Mälaren, Sweden’s third largest lake.

The Stockholm County Council predicts that water levels on Lake Mälaren will rise. It’s issued recommendations to municipalities on how to build sustainable housing near the lake.

Even though Botkyrka desperately needs more housing, the municipality listened to the advice.

“Even if you think this is scenic, a nice beach and close to the lake, unfortunately it’s inappropriate to build here,” says Berggren. “So we’ll have to find another place to build attractive housing.”

Inger Holmqvist at the Stockholm County Board is happyBotkyrka is following its advice.

“When we learned that Botkyrka cited our recommendations in their decision to deny the permit to build there we saw it as something positive,” she says. “We have worked on climate adaptation for several years with the goal of spreading knowledge about the effects, consequences, and how it is going to affect the county in the future.”

Holmqvist adds that now is the time to use this new knowledge.