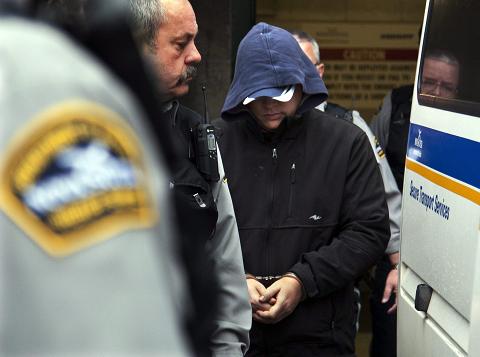 Royal Canadian Navy Intelligence Officer Jeffrey Delisle was arrested in Halifax last week for espionage. He is being charged under the Security of Information Act with “breach of trust and communicating safeguarded information to a foreign entity” between July 6, 2007 and January 13, 2012, the date on which he was arrested.

This is the first time that someone is being prosecuted under Section 16 of the act, and Sub-Lieutenant Delisle faces life imprisonment.

Delisle has been working for the Canadian Forces as an officer for the Navy since 2008, and as a reservist since 1996.

Most recently, beginning in August 2011, he started work at the HMCS Trinity in Halifax, a naval communications center.

It also houses the Canadian Forces Integrated Underseas Surveillance System Centre, which operates two remote SOSUS arrays for the Integrated Underseas Surveillance System, in which it participates with the United States. SOSUS was designed during the Cold War as an early warning system against Soviet ballistic missile submarines. Now that submarines have grown stealthier, SOSUS technology has become outdated, so information gathered from the arrays is not terribly critical anymore.

Still, Delisle could have been privy to sensitive information during his short time at Trinity. In her book, “Deeply Canadian,” Julie Ferguson writes, “Trinity is part of a global network of fixed and mobile acoustic sensors whose data is shared among western allies.” Much information about the paths of Canadian military and civilian ships up, down, and across the country’s three coastlines, along with information about allied ship movement, passes through Trinity. Both the information about Canadian ships and, perhaps more importantly, its NATO allies, could be quite valuable to other governments. Trinity also maintains Ferguson also writes that Canada’s Maritime Forces Atlantic, which are headquartered in Halifax, “can already produce a real-time surveillance picture that extends halfway across the north Atlantic – an area of 1.4 million sq. km” (p.80).

Canada has neither confirmed nor denied the identity of the foreign body, but many suspect that it is Russia. In fact, the Nova Scotia-based Chronicle Herald asserts that it “has confirmed [that the foreign body] is one or more Russian envoy.” When asked whether Russia was the recipient of sensitive information, Defense Minister Peter McKay stated, “I don’t think you can assume anything…I’m not denying or confirming anything.”

What type of information could Russia get out of Delisle? Some say that since he was a low-ranking officer, he probably did not have access to extremely high-level, need-to-know intelligence while at Trinity. However, other sources tell the Globe and Mail that he enjoyed top-level clearance.

Regardless of his stature, Russia might still have been able to bribe Delisle, who has a murky financial past, having declaring bankruptcy in 1998, to share intelligence on Canadian activity in the Arctic. There, the two countries dispute the territoriality of the Lomonosov Ridge (see this overview from Wired Magazine for a good introduction to the disagreement). Russia could also be interested in Canada’s underwater tracking technology. Lenta, a Russian newspaper, also states that Moscow could be interested in gathering more data from the Canadians on the Arctic because of the its “desire to win a showdown with Ottawa over natural resources in the Arctic.” Though any showdown will likely take place in the sluggish UN Commission on the Limits of the Continental Shelf rather than out in the field, knowing what claims Canada plans to submit to the UN in advance of its 2013 deadline would be highly advantageous for Russia.

Lenta warns readers to expect the resolution of the issue to be “difficult,” claiming that Ottawa might be preparing a response in the “form of notes of protest or expulsion of diplomats.” They don’t state a source, so this could be nothing but a far-fetched rumor for now. It is in Prime Minister Stephen Harper’s interests to keep relations with Russia on a good footing, especially since he’ll be traveling to Russky Island near Vladivostik for this year’s APEC summit in September.Of course, the UK was not afraid to expel four Russian diplomats after Moscow’s failure to extradite a man they accuse of murdering ex-KGB and ex-FSB officer Alexander Litvinenko, so perhaps Canada could do the same.

Meanwhile, another Russian news outlet, BFM, speculates that Delisle could have been spying for China or Iran, which could be interested in getting a hold of classified maritime intelligence as well. They’d probably be more interested in the movement of NATO-allied ships in the Pacific or Persian Gulf rather than the Arctic, however.

In the face of Canada’s biggest espionage case since the Cold War, McKay claims that Canada’s allies have “full confidence” in his country. Yet to the contrary, the Toronto Star says, “This is a blow to our credibility. There’s no point in denying it.” The problem for Canada lies not so much in the fact that its intelligence may have been breached, but rather that its allies might not trust it with as much intelligence going forward. Compounding the situation, trying an alleged spy always risks putting more of a country’s secrets on full display.

“SpyFile: Everything we know about Halifax’s espionage case,” OpenFile