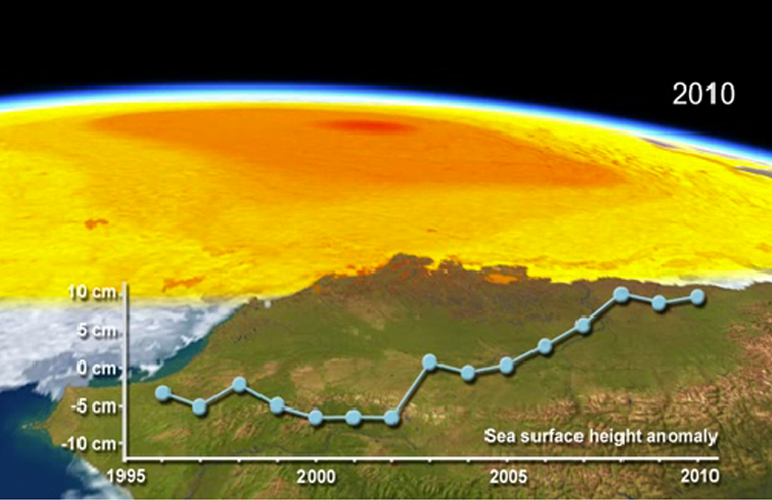 Enough extra fresh water to just about fill lakes Michigan and Huron to the brim has collected in the top layers of the Arctic Ocean northeast of Alaska during the past decade, according to new research published in the journal Nature Geoscience.

Driven largely by strong winds and an immense circular current, some 8,000 cubic kilometers of fresh water have bulged up into a widespread dome since the 1990s.

“In the western Arctic, the Beaufort Gyre is driven by a permanent … wind circulation,” lead author Katharine Giles of the Centre for Polar Observation in London, told BBC news in this illustrated story.

“It drives the water, forcing it to pile up in the centre of gyre, and this domes the sea surface.”

Giles and her four-member team monitored changes in the height of the sea surface between the mid 1990s and 2010 using the Eurorpean Space Agency satellites EFS-2 and Envisat. They found that the overall level in the Beaufort Sea and Canadian Basin has been rising about 2 centimeters per year, mostly during the 2000s.

“This increase in fresh water corresponds to an increase in the anti-cyclonicity (clockwise in the Northern Hemisphere) of the wind over the western Arctic,” they explained in this story posted by the Polar Observation center.

“Models had suggested that the action of the wind on the sea surface could cause a raised dome of freshwater to form in the middle of the Beaufort Gyre, but until now there had been no continuous observations of sea-surface height to categorically demonstrate this.”

A reversal of the wind could prompt a release of this fresh water into the rest of the Arctic Ocean or even into the Pacific and Atlantic, the scientists noted.

That’s not all. The scientists also found that the sea surface height didn’t always match the behavior of the wind — leading them to speculate that sea ice tweaks the pattern and changes the freshwater build-up in ways that still need to be analyzed.

“We were surprised to find that our results also suggested that something else was going on,” Giles said here. “One idea is that sea ice forms a barrier between the atmosphere and the ocean. So, as the sea-ice cover changes, the effect of the wind on the ocean might also change.”

There’s actually an ocean of freshwater perpetually sloshing around atop the Arctic Ocean — coming from river runoff, precipitation, evaporation, melting of sea ice and glaciers, and the complex interchange with the Pacific and Atlantic oceans, the authors explained.

“More than 70,000 cubic kilometers of freshwater are stored in the upper layer of the Arctic Ocean, leading to low salinities in upper-layer Arctic sea water, separated by a strong (boundary) from warm, saline water beneath,” the scientists wrote.

How much is that? About 16,800 cubic miles — enough to fill six Lake Superiors.

Where that water flows and how it interacts with sea life and the warmer, saltier water beneath is critical to Arctic oceanography. A different group of researchers reported in Nature a few weeks ago that the central Beaufort Sea was the freshest it’s been in 50 years, with most of the additional water coming from Eurasian river runoff — not ice melt.

“A hemisphere-wide phenomenon — and not just regional forces — has caused record-breaking amounts of freshwater to accumulate in the Arctic’s Beaufort Sea,” wrote Sandra Hines of the University of Washington in this story.