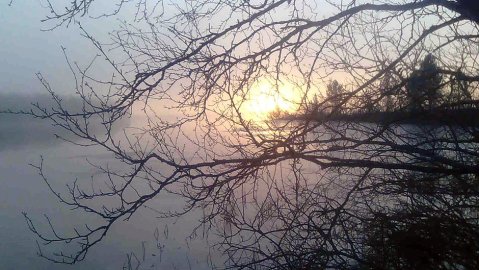 Winter has finally arrived in Finland, bringing frosty nights and short days. But for some, the dark period triggers gloomy moods that scientists say may be genetic.

“You get up in the morning—it’s dark. You go to work in the dark. Then, if you’re lucky, you have some brightness coming through the clouds for a couple of hours and again, when you leave the office, it’s dark,” describes Nicolas Trollé, who moved to Finland from France in 1999.

Due to Finland’s location in the North, nights lengthen dramatically as summer sunshine gives way to autumn rains. Come December, even southern Finland will have but a few hours of sunlight to enjoy during the day—provided it is not too cloudy.

The stretch from October to February is particularly difficult for people who find themselves affected by the lack of sunlight.

“It doesn’t strike you at first, but little by little you realise that you’re more and more depressed,” says Trollé. “You don’t really feel like doing sports or going out with your friends, and in the end you just isolate yourself.”

Nicolas is describing a very widespread phenomenon commonly known as the winter blues. Alternatively, it can take on a more sinister ring as seasonal affective disorder (SAD).

“Of course, this is very, very individual,” says professor Tarja Stenberg from the Institute of Biomedicine at the University of Helsinki. “People living in northern countries have to some extent become acclimatised. Those who move here appear to suffer much more.”

But even Finns are not safe from the winter slump.

“Among the Finnish adult population, people over 30, some 85 percent notice the change of seasons in their behaviour or wellbeing in some way,” says Timo Partonen of the National Institute for Health and Welfare (THL).

Symptoms associated with the winter blues include lowered quality of sleep, an increase in appetite followed by weight gain, lack of energy and decreased social activity. Throw a dampened mood into the picture and winter looks bleak indeed.

According to Partonen, only about 40 percent of Finnish adults say these symptoms pose a problem—and a mere one percent actually suffer from seasonal affective disorder, or serious depression which comes with the onset of winter.

But what is it about the dark, rainy season that brings such unwelcome effects?

The two features that set winter apart—especially in Finland—are freezing temperatures and lack of sunlight. The darkness seems to cause much more of a problem than the cold, says Stenberg.

Partonen offers a similar opinion, explaining that most of the data points to a relationship between insufficient lighting and the so-called circadian clock functions in the body.

“The circadian clock is a subset of neurons in the brain that follows the time outside the body and also registers the amount of light,” he clarifies.

Once this mechanism detects that the amount of light in the morning hours is insufficient, it slows down, disturbing the body’s sleep-wake cycle.

Precisely what happens within those cells remains a mystery, Partonen says, but some people may have a genetic predisposition to seasonal effects.

“There are genes needed for the proper functioning of the clock,” he adds. “It seems that there are unfavourable gene variants in people who have very serious symptoms winter after winter.”

The proteins in these genes fail do to what they should, resulting in particularly tough winters for some people.

Let there be light

“After the third winter, I snapped and decided to leave. I just couldn’t take it anymore,” says Trollé.

His story ends happily: he returned to sunny France and has not looked back. Naturally, this is not the answer for everyone.

Both experts list bright light therapy among the surest ways to deal with the winter blues. Partonen stresses that sufficient lighting is especially important when waking up.

“Scheduled exposure to bright light in the morning hours on consecutive days is the best way,” he says. “Half an hour in the morning for the first week, and then you can decrease the time to 15 minutes. But the key to success is that it’s repeated day after day.”

As for other measures, no particular food or vitamins will chase the effects of darkness away, Partonen says, but regular exercise will help. So will keeping in touch with friends and family.

“Usually, social withdrawal is a symptom and it makes things worse,” Partonen notes. “So keep up with contacts you have and take care of others as well.”

Heading outdoors and keeping active can go a long way in keeping the darkness at bay. There is much more to the approaching Finnish winter than the blues, after all.