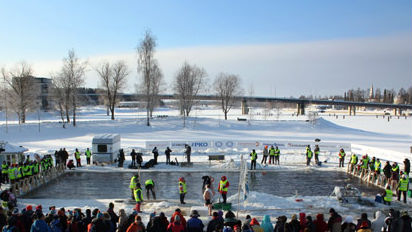 Competitors from around the world braved outdoor temperatures of -34 degrees celsius at the weekend to take part in Sweden’s first ever national winter outdoors swimming competition in the northern town of Skellefteå.

Although popular in Russia and Finland where swimmers enjoy the endorphin rush of wading through icy waters, Sweden has never before staged a national competition.

Lars Westerlund, chairperson of The Society for Happy Friends of Cold and Darkness, got the idea to stage the event in an effort to promote the benefits of Sweden’s long, cold winters.

“We are pioneers! We got 60 brave people to swim, they came from five countries and really enjoyed the experience,” Lars Westerlund told Radio Sweden.

“It was -34 outdoors, the coldest day and we chose the day because we had statistics which show that this is the coldest weekend and we had over 1,000 people to watch the maniacs go in the water,” Lars Westerlund said.

The 25-metre race was staged in different age categories and South African swimmer Caryn McKnight, who won her race, told Radio Sweden that the rush was amazing.

“It felt absolutely exhilirating and I would do it again in a heartbeat. I was very proud to make history as the first African to compete in the first Swedish winter swimming championship and it was great and I felt happy as I was swimming,” she said.

Organizers say they’ll make the race an annual event and will compete to stage the World Cup in Skellefteå in 2016.

487 ♥ Is Norway's farmed salmon as healthy as we think?