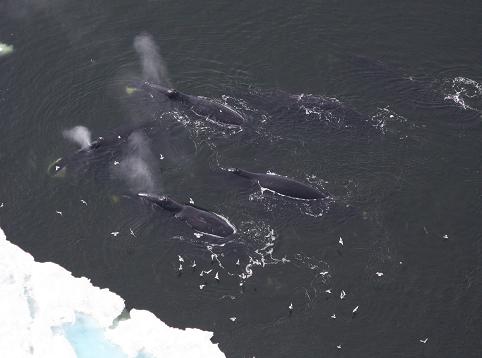 Underwater noise from ships can cause stress, which can make whales more susceptible to disease

New research suggests that increased shipping in the North could pose a serious threat to whales.

Scientists in the United States found that underwater noise from ships can cause stress in whales. It’s believed that stress makes them more susceptible to disease and less likely to reproduce.

Researcher Scott Kraus of the New England Aquarium was studying whales in the Bay of Fundy on September 11, 2001.

On that day, planes and ship traffic in the Eastern Seabord area ground to a halt as the United States government responded to the terror attacks on New York City.

“There was nothing, nobody else out there. And there was no shipping traffic,” he said.

He and his colleagues have since measured the level of stress hormones in the feces of right whales from before and immediately after that day and have just published their results.

“It turned out that the stress hormones dropped significantly in the days following 9/11,” he said.

Kraus says chronic stress promotes disease and mortality and can compromise reproduction. So – if Arctic ship traffic increases as expected – species similar to right whales, such as bowhead, may suffer.

“You have a great opportunity, if you’re going to be increasing shipping in those areas, to do the same kind of thing and even more thoroughly than we did with the right whale,” said Kraus.

The Foxe Basin and Hudson Strait could be key areas to watch because they’re important areas for bowheads. Those areas will also see a major increase in ship traffic if Baffinland Resources opens its iron ore mine at Mary River.