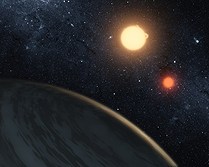 A Swedish-based space experiment using human blood cells as part of a study to find out why the immune systems of astronauts are weakened by space travel has been declared a success.

The cells were one of five experiments sent up into orbit in a Maser rocket from the Esrange space centre in northern Kiruna on Monday.

The five experiments on board come from the European Space Agency. The Swedish Space Corporation’s responsibility in Kiruna, a city in Sweden’s Arctic, lies with the rocket and the launch.

The man leading the maser 12 project for the Swedish Space Corporation is Gunnar Florin.